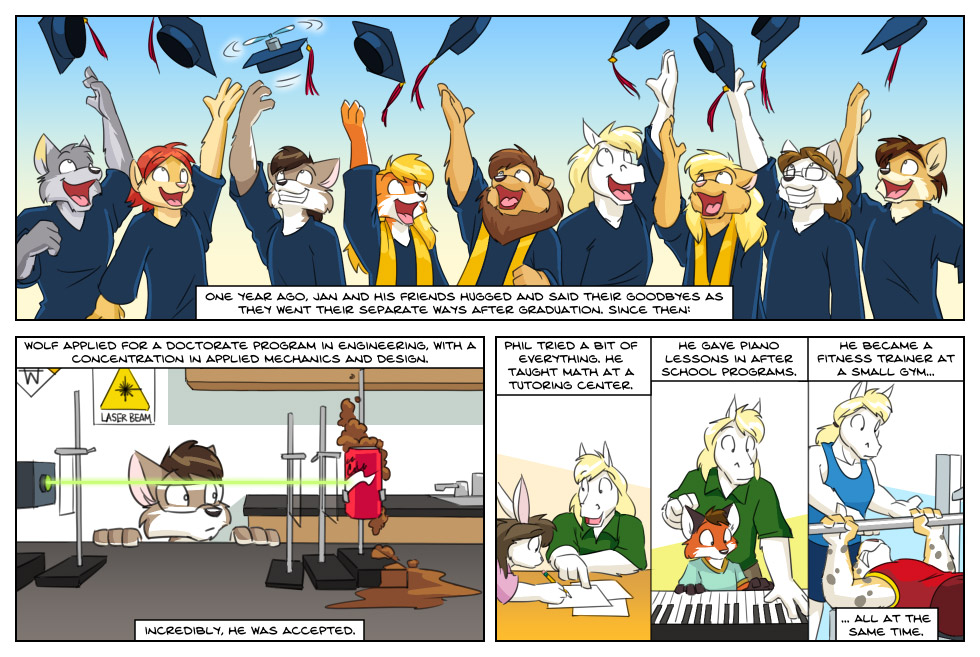 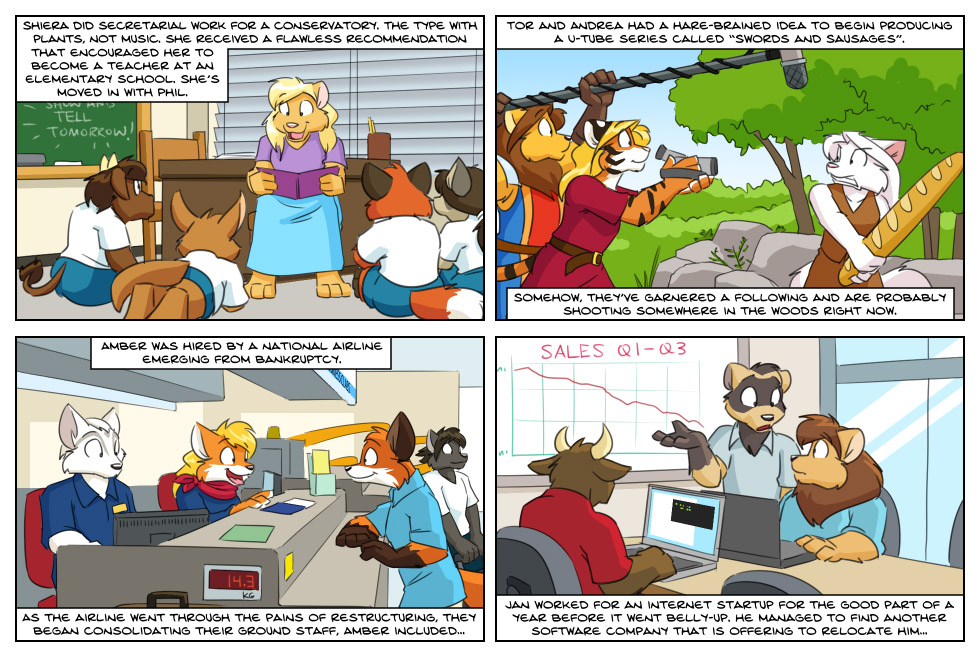 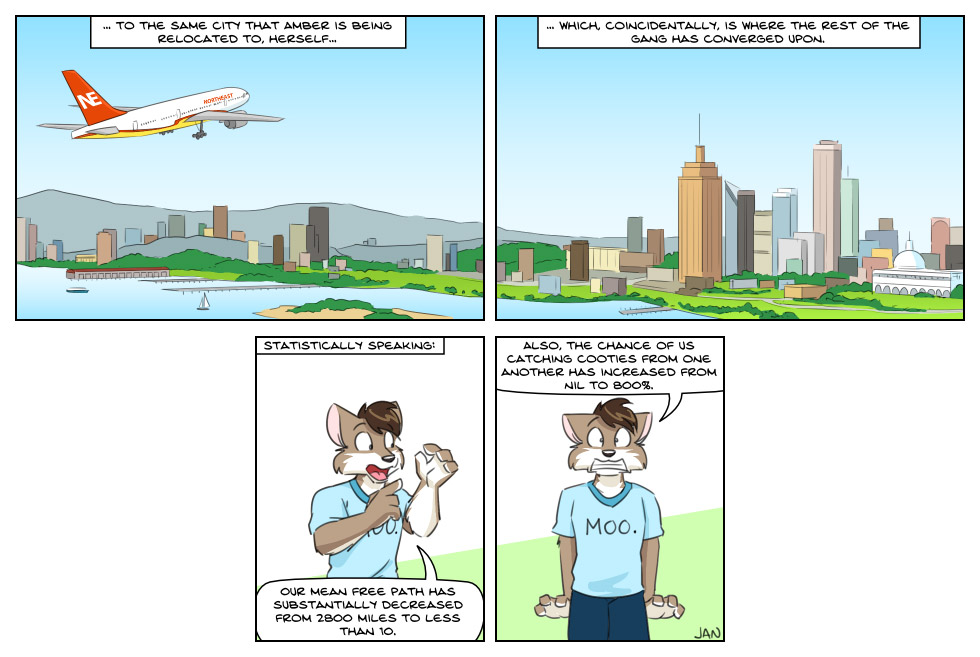 1
CAPTION: One year ago, Jan and his friends hugged and said their goodbyes and they went their separate ways after graduation. Since then:

2
CAPTION: Wolf applied for a doctorate program in engineering, with a concentration in applied mechanics and design.
CAPTION: Incredibly, he was accepted.

3
CAPTION: Phil tried a bit of everything. He taught math at a tutoring center.

4
CAPTION: He gave piano lessons in after school programs.

5
CAPTION: He became a fitness trainer at a small gym...
CAPTION: ... all at the same time.

6
CAPTION: Shiera did secretarial work for a conservatory. The type with plants, not music. She received a flawless recommendation that encouraged her to become a teacher at an elementary school. She's moved in with Phil.

7
CAPTION: Tor and Andrea had a hare-brained idea to begin producing a U-Tube series called "Swords and Sausages".
CAPTION: Somehow, they've garnered a following and are probably shooting somewhere in the woods right now.

8
CAPTION: Amber was hired by a national airline emerging from bankruptcy.
CAPTION: As the airline went through the pains of restructuring, they began consolidating their ground staff, Amber included...

9
CAPTION: Jan worked for an Internet startup for the good part of a year before it went belly-up. He managed to find another software company that is offering to relocate him...

10
CAPTION: ... to the same city that Amber is being relocated to, herself...

11
CAPTION: ... which, coincidentally, is where the rest of the gang has converged upon.

12
CAPTION: Statistically speaking:
WOLF: Our mean free path has substantially decreased from 2800 miles to less than 10.

13
WOLF: Also, the chance of catching cooties from one another has increased from nil to 800%.

Note: This is the revised version of the strip. The original can be found here.

MOO? I didn't know he played Masters Of Orion.

Yay!! Thank Jan. I like the new version of this page, it does explain the rest of the comic better I think.

Very nice! Not sure if this all means that S&S is in a fantasy world or if its a Utube show xD

@Lord_Chaos - Masters of Orion! Cannot believe someone else out there remembers that game.... I lost so many nights of study to that game and then later went to work too many days without sleep after Alpha Centari sucked me in the same way...

@Jan... like the new intro... makes the re-consolidation of the crew seem more 'fated' than manipulated... and lets Wolf be Wolf...

I love how Wolf's hat has a proppelor on it.... I wonder how long it toom him to rig that on there, considering that it took me hours to put a few ornaments on mine.I wonder where he plans tolet his hat fly off to. At least now he is putting his college eduction to good use:p.

So this explains where and what everyone did end up doing after collage, thanks and let me wish you a very happy holiday.

Wolf in a PhD program...for his thesis, will he cause the Black Mesa Incident?

Is that kindergarten Shiera is teaching?

I am loving all your characters and had just finished reading College Catastrophe. My goodness, you are a prolific artist. I first stumbled across your comics when I was still in college and a little afterwards. It was still updating at the time, but I really do admire and enjoy your art style.

I loved John Gneech's "Suburban Jungle" and the comics by Vince Suzukuwa such as "The Class Menangerie". Your comics reminds me a bit of those, as well as some "Octopus Pie" as well. Already your characters are becoming like friends I wish I could meet and get to know.