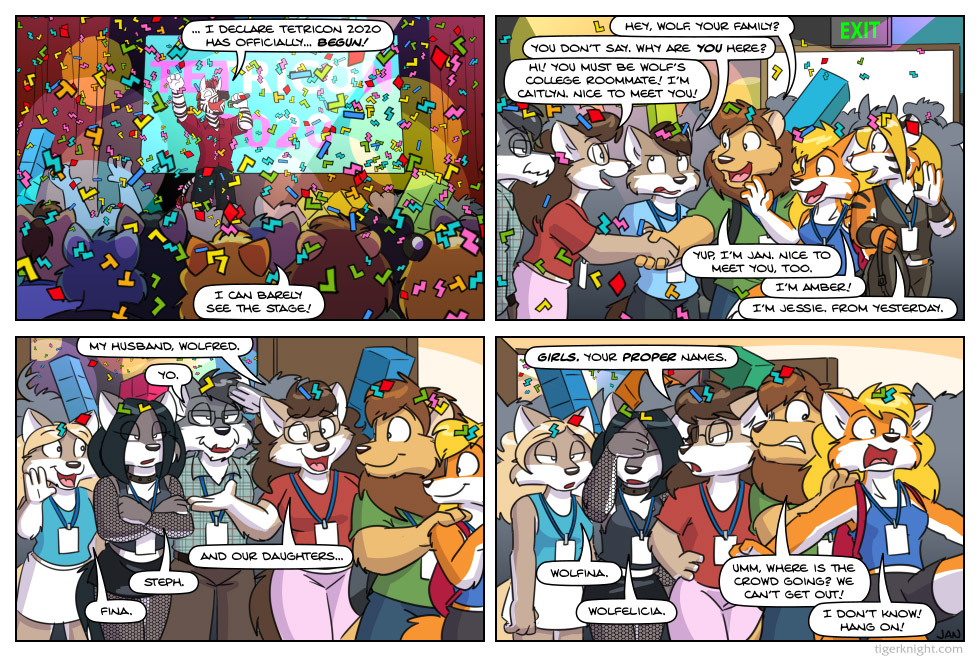 Just for the amusement of the parents, all three kids are named "Wolf": Wolfelica (the oldest), Wolfram (the middle), and Wolfina (the youngest). I'm sure they love it ;3


Oh god, those are some terrible names, the kind children kill their parents over.


Must have been Wolf's mom (Caitlin) that named them ;)


Thats the next comic @Tir_Amahn


Oddly I’ll call them by what they want to be called.


I'd call either of the daughters what ever they want.. both are cute after all, but they are no Jessie. Still if things with Jessie and I don't work... Hello Steph.. lol


I can almost see Wolf’s mother as the old stereotypical Jewish mother trying to play matchmaker between her daughters and Jan.


Say, shouldn't Moms name be "Coytlin"? She is half coyote, IIRC...


I suggest to Vanda to close his muzzle before it's filled with "tetris" confettis (or it's tetris shaped like marshmallows ?) . I can imagine the shame to be called Wolfelicia for a goth ............ ^_^"


There's crowd surfing, and then there's the tidal wave.


It just occurred to me (and was probably already pointed out in the comments years ago...multiple times...sorry): Wolfram is the European name for Tungsten.


Caitlyn just had to keep a pattern going.


That's wild how Wolfelica covered her eyes with her 'paw' 👍


Ironically, Wolfram sounds the most normal name out of all of them.


@SuperBH: They might have also used "Wolfgang." But he turned out to be a scientific genius rather than a musical one, so...

@Thorulf: W on the periodic table. From Wolframite. Some of the chemical symbols came from latin or greek, and the names stick. Sodium is Na, for Natrium. We use the old names in medicine when describing conditions of blood sodium. Hyponatremia = hypo (low) + natro (sodium) + emia (pertaining to blood).

I think I know where this crowd is going...they're being forced in one direction, like tetris pieces descending...they can go sideways and downward, but never upward. They're caught in the current.

Let's hope that Tetris 2 mechanics don't apply...because as the advert said, "there's bombs in it."