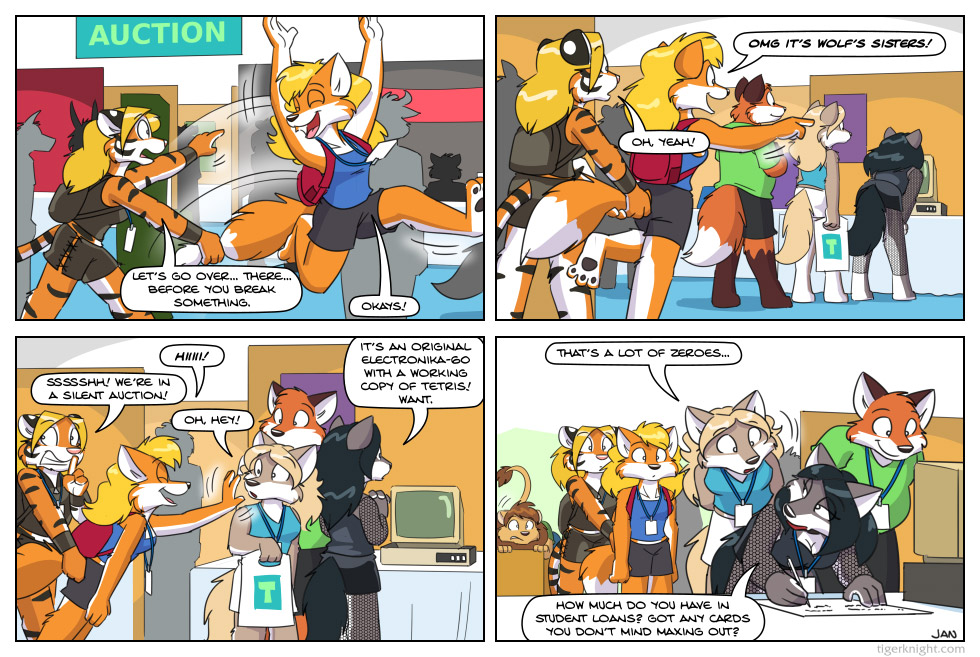 1
JESSIE: Let's go over... there... before you break something.
AMBER: Okays!

4
FINA: That's a lot of zeroes...
STEPH: How much do you have in student loans? Got any cards you don't mind maxing out?

Sorry for the late post, it's been one of those weeks...

Commence the bidding wars! You know things aren't going well when Jessie is the one trying to keep things under control.

Steph must be jumping in excitement with her tail wagging like crazy on the inside.

It's a silent auction, not a library.

@TeflonCougar I guess that joke didn't work, then ^^

"Oh come on, it's only slightly less expensive than a tank of fuel..."

And that's why you only bid with what is in your own pocket... cause the NapBox of Karma might be heading your way.

@Panther To be fair, it's not just an old computer - it's the same type of computer that was origionally used to program Tetris back in the 1980s!

@Silverwolf I'm afraid I don't get the reference. Could you help me out?

Looks like Steph is zeroing in on that 'puter.

The Jan mobile is incoming! The question tho, is Jan about to rear end or get rear ended by jessie?

Watch out! Amber has the tiger by the tail... Well, the tiger has a fox by the tail... Or Amber is doing the FoxTrot... well, she jumps around... GROAN! How about the lion is in the box... which isn't a saying... Oh come on! They aren't doing things right for a snazzy saying! Oh wait, that's it! The wolves are on the hunt... for an 80s machine that plays tetris... I give up.

Electronica 60 i prefer the military version Commandadore 72 I Still have mine from the '67s right next to the ManyVAC IIII in the basement.

So they have a you break it you bought it policy? If yes one should remove the caffeinated fox NOW.

gives a call to Cheryl , to say to her zere is an old PC to toss from ze roof

WB101 the first computer I got was a TRS-80 color computer.

gives a bunch of clams to WB101

@WB101; That was my second computer (Radio Shack CoCo 2)(still got it). First was a Timex Sinclair 1000 with a 1000 bits of memory and all programming done by hand (still was fun)

My first computer was a TS 1000. An electronics magazine showed how to connect a real keyboard to it. The trick I appreciated was making a copy of the keyboard picture in the manual and enlarging it enough on a copier to make good labels to put on the keys (I probably would have figured that out on my own, but it did save me some time and effort.) I glued them to the keyboard and placed the circuit board in a Danish butter cookie tin and grounded that to the ground wire on the cord I soldered to the wall wart power supply also inside the tin. The tin plating made soldering the ground wire a remarkably easy process. I did that about the time the computer was obsoleted by Timex Sinclair. I wish I had found that out before I went to the trouble of doing that. I was going to save up enough money to build the one Meg of memory foot high tower, too. I never really got around to doing anything else with the computer, so it is now an odd keepsake somewhere in my stuff.

My very first computer was an original Commodore 'Amiga 2000HD' with a NewTek Video Toaster, 50MHz accelerator/SCSI controller card, TBC II Time Base Corrector, 20Mb of RAM, dbl density floppy drive and three 240Mb harddrives. IIRC I got it around '94-'95.

I still have it, it still runs perfectly on it's original hardware/software. Thing is older than dinosaur crap and slower than an arthritic snail, but it was built like a damned anvil. I've gone through 6 PC's and 4 laptops and this ancient beast just keeps on chuggin' along.

I even came up with a way to send the Toaster's analog video output thru a small Radio Shack camcorder with an analog I/O as well as a FireWire output directly to my PC to record on the HDD for much easier editing. And the two systems are totally incompatible. The tape transport system in the camcorder is trashed but the electronics make a perfect analog to digital convertor.

NEVER throw any electronic stuff away. I think like Wolf. :-D

[ Well as far as early “PCs” are concerned, I was allowed to use the school’s TRS-80 m2 back in the day, unofficially for playing TREK, but officially for word processing. I recall that it was green-screen with built-in 8” floppy drives, bulky but top-tech for the area at that time.

Later on, I bought a slightly-used TI 99/4a from an aunt and taught myself TI Basic on it, mostly to program text-based games. It had tape recorder storage and came with a couple game cartridges. Eventually, I hot-wired a controller from an Atari 2600 onto it with spare wire/connectors/pins so that I could play the cartridges. May still have that around someplace. ]

[ I got to use that aunt’s IBM PC, even helped her install added memory into it, and copied/hacked/renamed the startup files so that one set of startups would run my games while the second set would run her checkbook/bookkeeping software. She’d get a bit upset when I forgot to swap out the (renamed) startup files before she went to use it. :D

I also had a wee bit of time on a friend's Commodore 64, but can’t really recall much about that one.

Now back to our unscheduled ying(let)-nanigans... ]

@Random Guy After 2001, oil speculation and price gouging jacked up the cost of fuel over 200%. It led to memes like this: