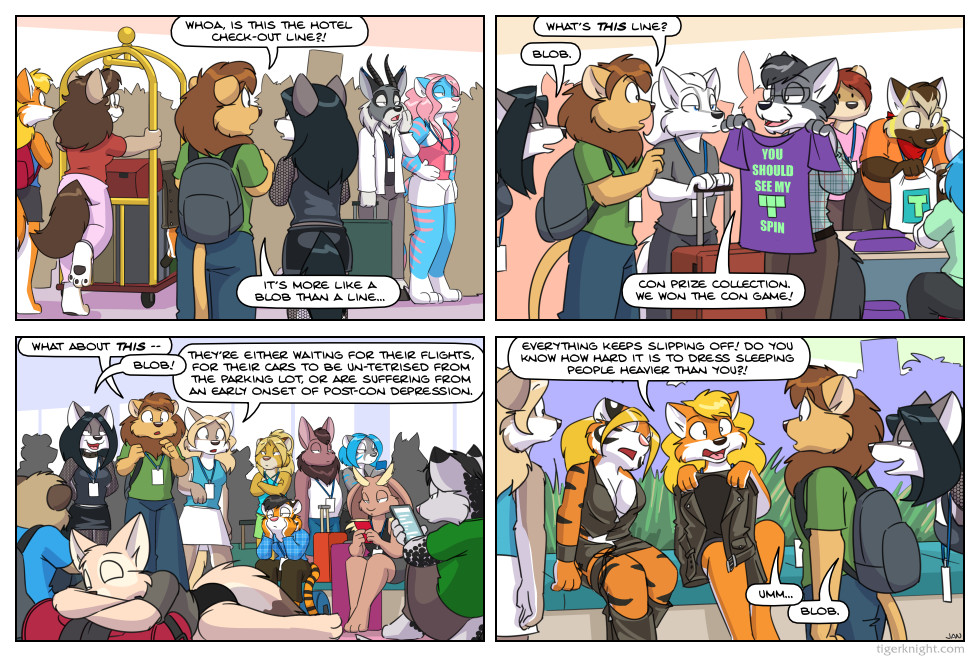 1
JAN: Whoa, is this the hotel check-out line?
STEPH: It's more like a blob than a line...

3
JAN: What about *this* --
STEPH: Blob!
FINA: They're either waiting for their flights, for their cars to be un-Tetrised from the parking lot, or are suffering from an early onset of post-con depression.

4
AMBER: Everything keeps slipping off! Do you know how hard it is to dress sleeping people heavier than you?!
JAN: Um...
STEPH: Blob.

The post-con crowd lumbers about. How Wolf's mom managed to procure a luggage trolley is beyond me :P

Jessie sleeps in for about half the day. And my guy just seems bored and tired. Steph has a cute smile as well.

I'd be willing to have a go at dressing Jessie, asleep or otherwise. XD

I still rather like the character of Steph. I might make a digital painting of her as a bit of fan art in the style of my characters (highly detailed and near realistic). :)

As for Jesse, assuming there are none, I wonder how bad she would freak out waking up next to a human--just an odd thought. Or, Wolf having a rather vivid and unexplained dream of Jesse where he wakes up and finds her lying beside him with a smile and neither of them have anything on beneath the covers. I can just see him totally wig out---then he wakes up and finds himself at her place... That boy needs some help, for sure, though maybe Jesse might be the one to get him over his fear of females.

The way you show Steph leaning in from the sides to make her one word comment reminds me of the "Sabrina - Online" web comic.

(Formally known as Antarian_knight, for those not in the know) I look so done with the blob, I mean...the line... That is one thing I do recall from end of the cons I have been to. Lots of bored/sad people milling around somewhat aimlessly.

Still, I love this, especially the persistent comments of blob.

Well mom was the special guest winner, it's gotta come with some kind of perk.

That last panel ... I think you misspelled "BlOOBS".

Poor amber, jess is going to wake up and wonder what happened and she is going to try to explain how she practically dressed the dead. :P Also are you sure wolfs sister is part coy wolf? /:)

Man, post-Con Depression is the worst. But it's worth suffering through, just to have been there. :)

@Tiger_T Snrk MY definition of PCD is a MASSIVE hangover......the worse I feel, the more fun I know I musta had.** ;-D

Of course, they still have to hook up with Wolf on the way home...unless there's going to be a "Wait, aren't we forgetting something? Nah..." gag. :-)

@S'aaruuk as long as you don't get dressed by Amber while being out......

*at the garage * -'scuse me, can i borrow your car spring tensioner? Have to pack something up, the darn zipper woun't hold..

Also, i've never visited cons, but i guess, they barely differ from autoclub fests, - all the sleepy blobs in 'eh mornin'n'all.

@ndrvr Although I've never drunk m'self into passing/blacking out, I'd have no problem whatsoever with Amber dressing me..........I'd have even LESS problem with her UNdressing me. Just so long I could undress HER at the same time. Evil, wicked, lascivious grin

Ah, yes, PCD. I remember this feeling well, and I also know how I feel when I miss the con altogether and have to wait for next year.

The consistent 'Blob' comments are accurate, as that's usually exactly how I feel.

It's less a line and more a strand of chromatin.

@S'aaruuk well, there's that chuckle. I for one'll let Jessie do the fashion shenanigans to me.

Dump her on Wolf. This is all his fault, so he should be the one caring for her.

That wouldnt make him feel awkward at all~ >.>

Steph iz a "blob" fan ? ...... I'm surprized to see how much Amber haz succeed to dress Jessie . Maybe it should have been better and faster to wrap ze tigress in a towel ^_^"

@Bachelorwolf; I belive, the second order fire alarm is rigged to dispose sprinklers automatically (irrelevant of fire presence), so.. unless you want the con-blob to turn into a wet shirt conte~ oh, right..