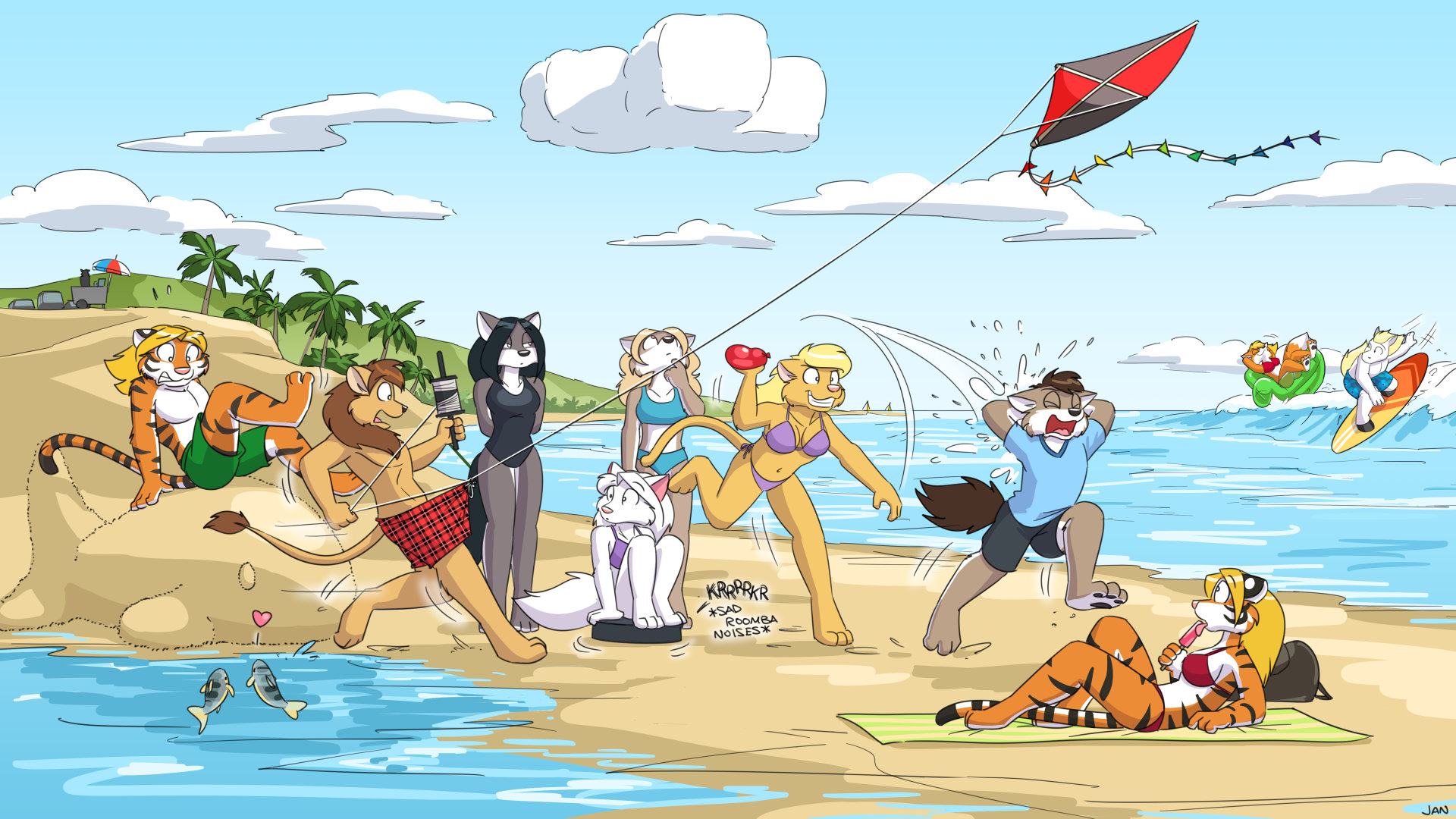 Everyone's got their own way to relax at the beach :3

Nine to Nine will resume next week. Just needed one more bumper pic to buy a bit of time ^^

Looks like a fun time. And the sisters are cute in their own way.

Did Tor just realize what he was sitting on?

Aww, the roomba not too happy about the sand....Maybe next year it can have little RC car tires to help it get around better? :P

Nice to see you back and recharged. :)

I hope Phil has some non-skid on his board.

Looks like Wolf is about to fall over or on Jesse (again).

That Roomba has got to be struggling in that sand (if it had the ability to display emoticons on it's top surface, I'm sure it would have a :p )

...and Steph's sister (can't think of her name at the moment) still has Tetris on the brain.

I hope Jesse will be able to get Wolf to get over his anxieties and fears concerning females...at least for one weekend. ;)

Jesse's innocently licking on that popsicle while looking right at Wolf...

Steph's expression is like, "My idiot brother's wigging out again..."

Jan is about to have a "wardrobe malfunction".

The fishes are again waaay too much interested in Tor. Quick, hide his UCAD (Unidirectional Carp Attractor Device, also known as T.A.I.L.), or this will end in tears again. Also: the Tetris cloud is a nice touch. This way the gang don't have to worry about rain, as soon as enough clouds gather together, they will vanish...

@AncientWolf Where are you getting seven and three? I see six and four: Amber, Jesse, Andrea, Sheila, and the Wolf sisters; Wolf, Tor, Jan, and Phil~

Also big plus for one piece swimsuit, it has its own strange magic :)

@AncientWolf Honestly right now I can imagine only progress between Jessie and Wolf. But that way Wolf has to fall asleep and wake up bound and almost naked on bed, so Jessie can touch him any way she wants > :P Poor Wolf...and lucky Wolf at the same time. His brain must end in kernel panic at that point!

@jprime He sees he's being eyed by the fish. It's a running gag that his tail is like a worm when it comes to attracting fish. Forget if it's only seen in S&S or if we've seen it in 9t9 too.

Tir_Amahn Except his tail's nowhere near the fish.

@romstop Um...I think it was a case of mistaken identity (i.e.: had a "senior moment") -- I was trying to figure out who the other tiger was and for some oddball reason or another, I didn't think about the fact that the character in question wasn't wearing a bikini top. Der! My mistake.

This is a good demonstration why one should never ass/u/me...it didn't occur to me that the 2nd tiger character was Tor (the one sitting on the sand sculpture "fish").

Chalk it up to me just having a "senior moment" (I'm in my 60s, after all)...and maybe because many of the female furry characters in one of my books don't wear anything more than a breech cloth and jewelry.

@Adam just make sure Wolf doesn't get his clumsy paws on the Roomba. We'll never hear the end of it.

Just had a thought of a potential filler continuation...Poor Jan continues to have his wardrobe malfunction, but we don't see anything of the family vegetables...on the other hand, the wolf sisters do...but neither one reacts, other than both having a thought bubble of the tetris line piece... ;-)

I’d like an “after” pic of Jan please c;

@ndrvr Somehow I think andrea will growl wolf away if he tried. Either that or he messes it up, then jan gets a new roomba with the offroad package. lol

Okay, given the fact that karps are living in the non-salt water, Tor's being haunted here. Also, i think many have traced Jessie's look direction here (i'd drooled too, being in her point of view), but the most exciting thing here is the innocent look of Mrs.'Blob!', who obviously had nothing to do with Jan's cable accident.. ;D

How'd you get the Jan get the drawstring of his shorts caught in the string of the kite?

I wonder if Wolf's sister would rather hop into my truck and be somewhere other than the beach?

"Sad Roomba Noises" - Why do you bring a Roomba to the beach?! It's pure sadism against that poor machine!

Also, the fishies, falling in love with the sand-whale are so cute! (Also Tor being scared by them, lol. :'D )