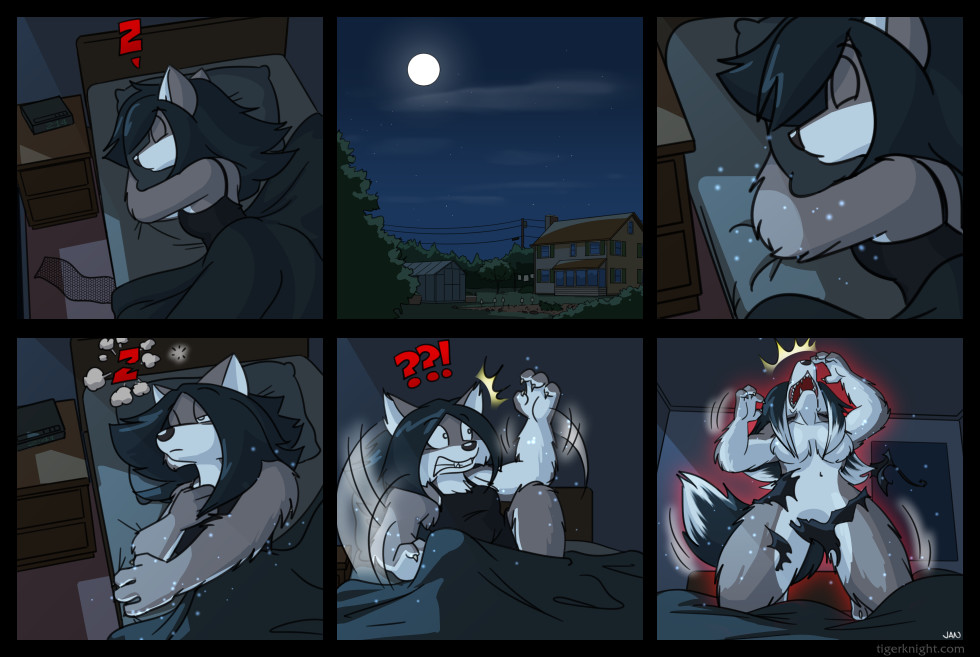 No one expects a werewolf story in May, so here we go! :D

Some radiation residue or after effects of something. Maybe some mutant gene she has only. Either way she is fluffy.

How can she be a werewolf if she's already a wolf?

Either she's dreaming or her brother's latest experiment did what they always do.

It's just a simple mayfever, give her some diphenhydramine and she'll feel better in the morning.

Light of the full moon slowly creeping across her bed. She has were wolf genes.

Ooo...Stef...she looked so sweet lying there in the first panel. <3

An anthro wolf...maybe she's a wolfwere (instead of a werewolf)? Is she going to revert to a four-footed form, or is she going to turn into a human? Or some hulking She-Hulk wolf?

Just what kind of experimental stuff has she been involved with in her line of work? Or is this some weirdness caused by her brother? Probably not him, because he deals more with physics or electrical type stuff, not biochemistry. Unless this is something that's been passed down the line genetically.

@Walt True. If I recall (also if I look it up on Google) it comes form the old English term Werewulf, in which ‘were’ which comes from the old English word ‘wer’ meaning ‘man’, so technically, a Wolf turning into a Wolf would be a Wolfwolf. Doesn’t really bring to mind the same thing though…

Ah, when Puberty hits. I remember it well. Just like last century.

shouldn't have eaten that pizza before bed

It's a Backstreet Boys video!

she turns into a "real" wild wolf

Maybe she will become a "real" wolf

The artist is having an identity crisis?

Oh no! She’s going to change into a monstrous murderous ravening human!

Were wolf? There wolf!

@Walt: she's not turning into a were-wolf, but a square-wolf...

The way her clothes are torn to shreds, maybe she's a wolf-hulk. [Marvel lawyers approaching] Okay, a werewolf.

If this isn't some weird dream sequence I'm blaming Wolf. This just seems like the sort of thing that he'd somehow have caused to happen.

@ THISGUY - Since "wer" is Old English for man, then she should be exempt since she's a female. Right? LOL.

Personally, I think this is just the result of playing all that Tetris at the Tetriscon. You'll note that the problem started in her arms and hands then it moved to the rest of her body.

There wolf. There castle.... Although judging by the white hair and tail she develops, maybe goth wolf turns into genki wolf? Oh, the horror....

In any case, Steph would technically turn into a She-Wolf-Wolf.

Maybe it was the IKEA meatballs

Ah, she's becoming the most double wolf ever! Count me in!

Anyway, nice to see Step getting her own little strip.

D'awww that was likely A favorite set of sleep clothes.

Shedding season? Starting to see the first signs of a summer coat blowout on the Malamute-mix here. :)

I suspect the origin of werewolves had nothing to do with wolves, but rather Norse warriors who were beserkers since they would sometimes wear animal hides. Here's a good article on berserkers:

Given how superstitious people were back then, having the Norse come a-viking (raiding), was terrifying enough, but to see a berserker...that really would scare the heck out of people. I wouldn't doubt that tales of "werewolves" were from accounts of "beast men" who seemed "possessed". It's because The Church (who was often an easy target) spread such stories, actual wolves have been hunted to near extinction.

Back to the comic...if this is a genetic thing as one suggested, then wouldn't this have come up before in the story? Like, how Wolfram got scared witless by his mother and it gave him a fear of "girl cooties". I suspect it's something she worked on...

Aaaaand suddenly the musicbox in me noggins throws up this:

Ah, the full moon. That magic time when those wolves of certain bloodlines, curses, or infections find that they shift from mere wolves into wolves. Yes, she has become a... Wolfwolf!

Okay, this is actually really interesting, even if it is a joke~

The obvious callback joke is "cooties are REAL after all?!"

And for some reason I'm getting Teen Wolf (the original Michael J Fox movie, not the awful TV series that used the name) vibes from this, imagining Stef getting up only to discover Mom and Dad sitting at the kitchen table, all bulked out themselves, with the attitude of 'There's something we need to tell you...' :-)

Wolfie's gene experiments on his sister.

Why do we have to wear those ridiculous ties?

THAa-i-mean.. why does the rocket science always have something to do with mutations?

If she howls at the moon I just might haveta rethink my stance on dating younger females... O_o

Oh and has Wolf been in the Adolescent Freaky Samurai Woodchucks mutagen?

Could be a old family curse XD Or just that time of the month. One can never tell ;)

Will she turn into a human when the Moon sets?

this reminds me of a "were-MAN" gag in the online comic "Direman"...

It's static electricity. She's not properly grounded, so she's getting extremely poofy.

“Even a wolf who is pure in heart, And says her prayers by night, May become a were when the wolfbane blooms, And the moon is full and bright.”

If I recall correctly, she work within the rocket industry... So, it should be a bit closer to the "Fantastic Four", than the "Incredible Hulk".