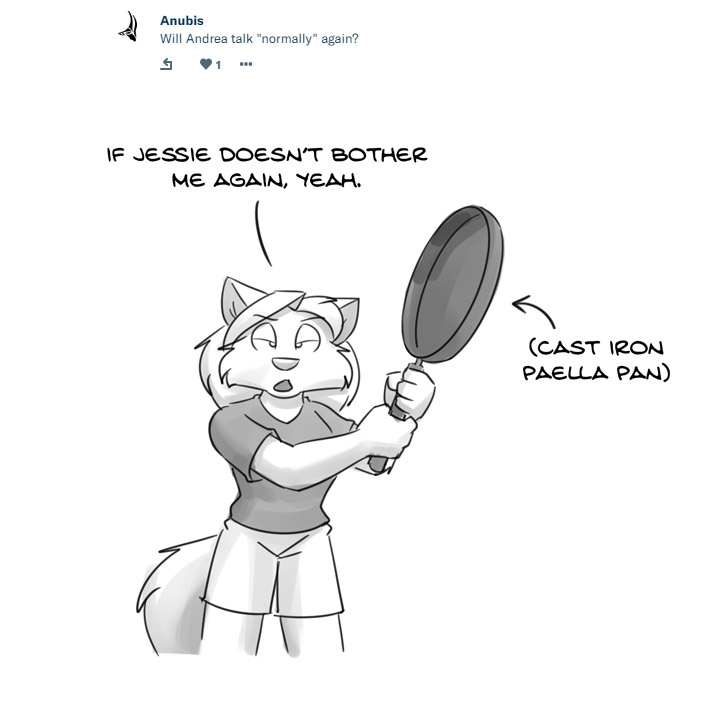 Andrea the barbarian... And I'm fantasizing leather and bare fur...

Seems jess is attempting to initiate multi speed, variable stroke, omni directional, reciprocation, that will initiate sensory input overload and pleasure memory over stack resulting in system crashing and a hard reboot in DoS mode, with wolf.... My only concern is if the deed goes through, you will have united two highly variable units of "anti Andrea" together resulting in possibly much more volatile behavior patterns once an Andrea is induced into close proximity of the newly developed relationship.

Looks more like a skillet than a paella pan! Also, just as I was about to crack the squeaker code, we find out she can actually emit words...

Why does Jessie bother Andrea?

Just hit her with the pan when she does, she might learn eventually.

Yes, all will obey the cast iron Paella pan of vixen justice.

I doubt that Jessie comes to bother Andrea again , after their fight during S&S . More betting about the tiger be afraid now of the vixen ^_^"

Still hoping for that reconciliation.

Oh boy, this paella pan has a wrong shape AND a wrong handle.

Andrea handles things that pan out. Better don a helmet....

Ah yes, but can she deflect arrows with it? O_o

"Paella pan" is redundant. "Paella" comes from Old French Paelle, which means "pan". So to say Paella pan is to say pan pan.

Sweetie, you have some serious issues. Get some help.

Andrea needs a trucker's winch bar in order to get the best results. =P For some reason, I get the feeling Jessie has one in her garage because... Reasons. ;) Besides, someone will NOT be the least bit happy that the pan/skillet (looks like there's a bit of a debate starting about this) is being used in a most improper manner. cue for more amusing mayhem as a result