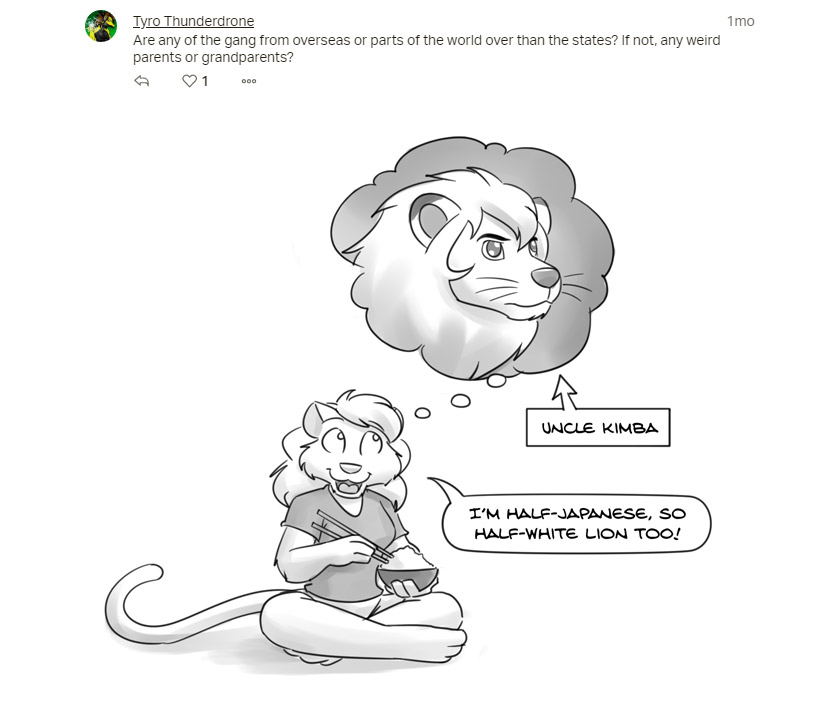 Half Japanese, that makes her sound more exotic.

Always thought she was just a mountain lion all this time, better known as a puma.

@Adam Except they aren't lions. Lions are panthera.

@MiyuHogosha (aka Swift): Pumas are of that genus, too.

No, they're not. Pumas, a.k.a cougars a.k.a mountain lions, are in the genus Puma. https://en.wikipedia.org/wiki/Cougar and were formerly assigned to Felis 'cause they're considerably more closely related to smaller cats including domestic cats than to other large cats. They cannot roar, unlike the Panthera cats, but they can purr, like a domestic cat. (Warning: it's a Bad Idea™ to try to get close enough to a puma to do a personal test.) The various Panther cats will interbreed with each other, though jaguars can only do this in captivity as they're the only Panthera cat in the Western Hemisphere and don't exist outside of that hemisphere. The Panthera cats will not interbred with pumas. Jaguars won't even try. Lions, now, lions will try for pretty much anything cat-shaped, but they're lions.

Is it weird I get this reference despite not having watched that movie, simply because I saw videos on how TLK ripped off Kimba?

Oh , well : a wolf teaching on panthers . That means i'll have right to do the same with wolves XD

Of course, Jan forgot himself, who is from Hong Kong, even in the comic, as evidenced in some of the CC comics. https://www.tigerknight.com/cc/2001-11-22

Gosh, Kimba. That character is even older than [i] am!

If your Kimba's Niece then your also Lyra's Niece too awesome

Jan I think you drew Kimba perfectly and he looks the same way he did in the show.

In Barely Brown Bear Land, your Meep Squeaks you! Dat all i say for dis question.