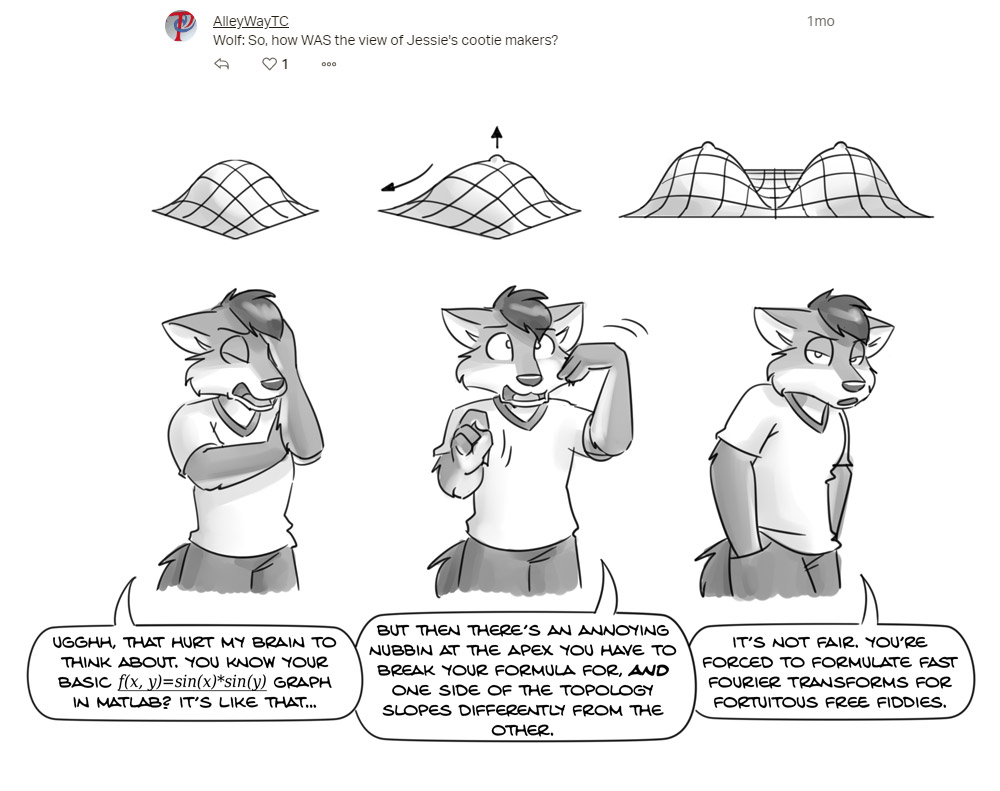 In other words he can't stop thinking about her boobies.

People are complex. I love that complexity.

Localized Min/Max and Saddle Points all over. So much math to keep you busy for days and days.

Twin mounds with nubbin are hard to mathematize ; isn't it , Wolf ^_^"

And somehow Wolf made it mathematically possible to render boobs...

Definitely hiring him for the graphic design team!

...And ask him to explain breast jiggling!

Wolf, the point is that you have three dimensional objects whose topology you can manipulate by hand. If the curvature isn't pleasing you apply pressure to rectify it. It's more fun to have physical representations of those than digital ones since the texture and bouyancy cant be measured without hands in research

I see Wolf is awfully well-versed within the wondrous word-weaving art of alliteration. How swell, what awesome news; who would’ve wagered! ~ @Panther: it’s not the only thing that’s hard ;) ...which makes me think, how would he describe his cooties-indicator? I graduated in science (genetics) but wasn’t good at the mathematical aspect.

He would be the only one to reduce a female trait to math.

Wolf; It depends on your point of view. With reference to 'ama-115' imagine yourself in Kiela's place

Using similar mathematics, he drew the dong on the chalkboard in college.

And possibly even more unfair is the fact the its inherently true that no two slopes are ever the same. The equilibrium of female mounds is tarnished by the fact that one side develops differently from the other, resulting in double the amount of mathematical necessities to represent each mound respectably. :P

@jprime: Fourier was a very influential mathematician. Typically one has a given function given in a form "what is the value at given points" so for example f(x)=1/(1+x^2), but in practical problems like here you just get a collection of points like f(0)=1, f(1)=1/2, f(2)=1/5 and so on.

Fourier transform decomposes a given function into a collection of sine and cosine functions, which is very useful for estimating how the function looks like between those given points among other things.

@William Carney: not the only one https://pbfcomics.com/comics/the-breakthrough/ ...but definitely one of a rare breed, for obvious reasons ;3

Don't ask him to explain cootie's

Just wait till he's forced to calculate the jiggle factor in.

He can't stop thinking math equations that equate to the shape of her boobs!! HA!!! I love it!

Or calculate the level of softness. Before, doing and after.

Ephesus « 26 May 2019 @William Carney: not the only one https://pbfcomics.com/comics/the-breakthrough/ ...but definitely one of a rare breed, for obvious reasons ;3

I was talking here on the comic that I've read so far anyway. I've not noticed anyone here. Another thought I just had a few minutes ago is that Wolf did not take into account the motion of the body part. That would also be complex math. :)

Those are nice alliterations in the last panel, Wolf.

Or you can do this: https://pbs.twimg.com/media/D8DEfN3WwAoCi0K.jpg:large

Oh god MATLAB. One of the deciding factors in killing my interest in an engineering career. Gotta love it when a program tells you there's an error despite putting in the exact same input as the guy next to you who didn't.