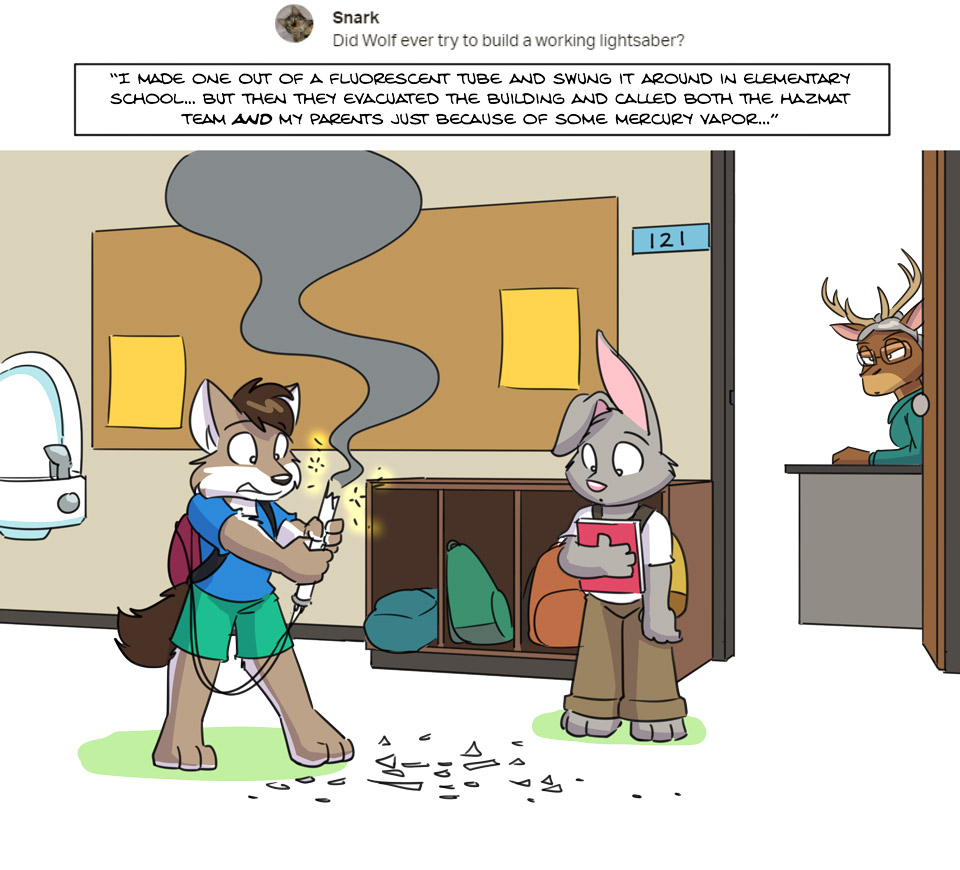 From the MSDS for mercury, one of the symptoms of mercury poisoning is mania...

We welcome the madness... sanity is for the boring.

Well then.. That would explain why Wolf is the way he is.. nods

If that's true... Maybe that wasn't the first time he was exposed to Hg vapor...

The fact he tried to make a light saber in the first place indicates the mania was already there.

Not to mention a hazard magnified by the non-existence of footwear.

Got a laugh from that one. Just love Wolf.

So young and already mad XD

The 'mercury madness' that evolved around "the hazards of CFL's" just made me LOL in the faces of all the fearmongers. No one giving a single thought to the multiple 8' long fluorescent tubes hanging overhead in most office buildings, Home Depot, Office Max etc.....each one holding no less than 2-3x the mercury vapor than any CFL.

A far BIGGER toxicity threat comes from the phosphor coating the inside of the glass envelope. And JPRIME is absolutely correct about the added hazard of no footwear with the PHOSPHOR COATED glass shards all over the floor.

I'm 70 and have been playing with liquid mercury since my single digits and it hasn't harmed me in the slightest. And I was in the Emergency Medical Field for over 25 years, so I would know.

That was super-dangerous, especially in... YOU GUESSED IT (I think).

@Jan: True, but clearly Wolf was already manic leading up to this incident.

Is it normal that the shadows are green ?

I thought the same question as Panther re: the green shadows..., but young Wolf is very cute, if dangerous!

Who wants to have an impression may ask a school or possibly a pharmacy or chemical lab for a demonstration. Take a beaker with a bit mercury in it. Switch off the light and use a UV lamp aka blacklight. You will see violett vapours come out of the glass, creep over the table .... It is recommended to do that under an exhaust hood.

You dont have that much in a fluorescent lamp. Just dont break to many of them.

saaruk is right. It becomes dangerous, when you are a gold miner in hillbackistan who uses mercury to solve gold from stones and evaporates it after with a welding flame. Or the hatter from old times who used it a lot in their business. The mad hatter is not a joke.

For normal work or random fluorescent lamp break I wouldnt mind at all.

Years ago when CFL's were just coming into routine common use, I remember the EPA, another totally useless alphabet agency, actually published a "proper procedure" in case a small CFL were to break inside the home.

First open all windows and doors, EVACUATE YOUR HOME for at least 2 hours, notify HazMat and EPA. Keeps pets and children out of the area where the breakage occurred until all traces of it have been safely removed.

Do you BELIEVE this bullshit?????? All this for a tiny 20W curly-cue fluorescent lamp.

People were downright TERRIFIED of CFL's believing that they were the next WMD and being sold at Home Depot/Lowe's etc.

I didn't know whether to be amused, frightened (at the gullibility of people today) or infuriated at the blatant bullshit fearmongering of the EPA.

Question for Wolf. What was the first gadget you made and when?

Wolf must have wells of Hg on mind. Conflicting worlds of thought meshed in neuro-gears over time, soon to be awakened from long sleep by relentless tigress.

@William: Wolf " Escape rope out of a diaper"

Wait. Wolf, are you saying that mercury vapor is a hazard? Who'd have thunk it?

Make sure you also take some spirulina. Not only is it a great source of protein, it's great at removing divalent cations (like, say, heavy metals) from the body. I've actually done the research and have some journal articles on the subject.