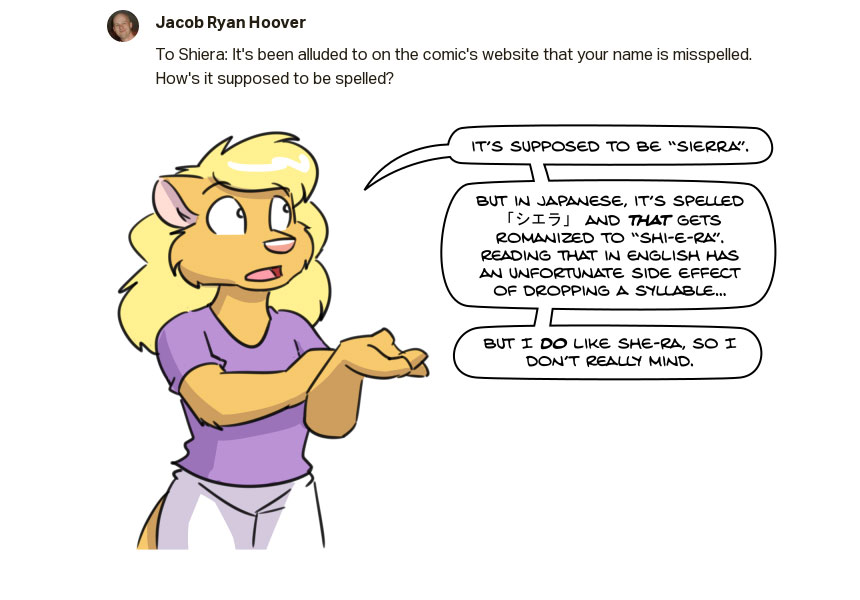 Going with the flow.

All this time, I've been pronouncing both the "i" and the "e".

Now I'd love to see her dressed as Netflix She-Ra.

But who would be her Catra?

Always wondered this since CC. Now I know.

"No, no, no! It's spelled 'Luxury Yact', but it's actually pronounced 'Throat Warbler Mangrove!"

Ah engrish, how else can we butcher up text? But I must say, the name does seem to fit her.

I've pronounced it "Shay-ear-a" like Hawkgirl from DC comics.

I thought it was "shearer" as in Teixiera or "tea-shearer" weirdly said a certain way shearer as in to shave a sheep: can sound still like She-Ra xD. Also read sometimes like Shy-rah as a figurine I have from the Enchantica series Shyira is similar :P just my two cents heh

I always read it as 3 syllables... She-air-rah

Late is late, but actually, they're all just variations of the same name. Filmation were just reading it wrong, you can see in the logo, it says SИЭ-RA, and it sounds exactly like Sierra, but in old slavian it's in two words, for "shines the sun".

So basically, Sie Ra was a princess of solar power and she did perform some colorful technics, which were considered "magic", back in the day. (Hell, some of those still are, today) Of course, it goes deeper than that, but i'm not starting mythology debates here.. ;P