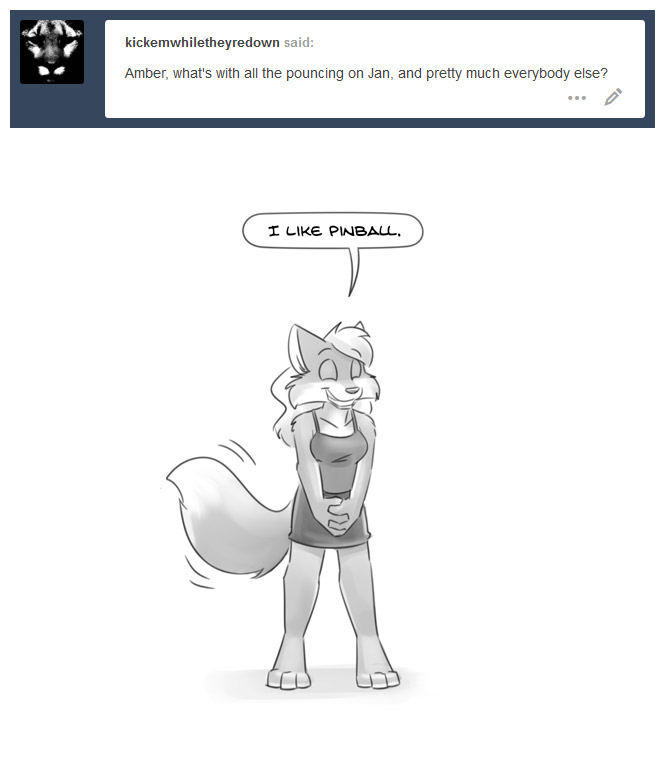 So what happens when it's multiball?

Have a question for the cast? Send them here!

Yooooo, that cutie can pounce me any time~

I find this answer both descriptive and satisfactory.

I dunno... I pictured Amber as a sneaky hugger girl. If you don't know that term I made up/can't understand, let me explain a bit with a personal example. In high school and college, there was a girl who would sneak up to people for a hug. She would go for a pounce whenever anyone was caught off guard. For me, I though she liked me... but she pretty much did it for everyone. Eventually, she, like Amber, would cause several people to be on the lookout for her and prepare for the inevitable, uncontrollable pounce within. She may have been a cat in a spirit animal- dunno. In sciency terms, she might have a bit oxytocin and adrenaline rush by pouncing for a hug and found a love for it. Through a sort of evolutionary standpoint, she may have had an accentuated primitive response to hunt/search for males through a slight sexual selective idea. . But I like this/her answer too. :3 Amber looks cute in this pic too.

Pinball? Amber, that's more like a superball moving with the speed of a paintball.

Hey, as long as she isn't into dropping anvils or relationships with strange roadrunners, she's OK in my book.

Wait... where'd this bow on my tail come from? O_o

The link for the AMA questions is Borked. Wheres the Swedish Chef when you really need him? He's the expert on all things "Bork!" related.