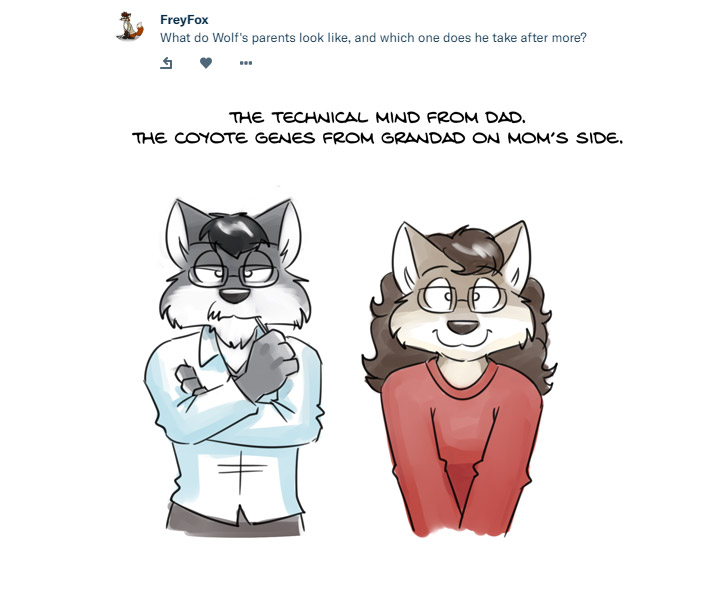 Now I have it headcanon he's related to Wile E. Coyote.

@shockwave07: I was just going to ask that. Was granddad perhaps named Wile E.?

So what ? He wouldn't be wolf Wolfram but wolf E. Coyote ?

Seeing how his parents seems so serious , how Wolf can be it ? ^_^"

If coyotes are free-thinking scavengers, then that might explain why Wolf is able to think so far outside of the box. I can only think that somehow his mom's thought processes got scrambled a bit somewhere along the way and she passed that on to Wolf.

As to Wolf's parents, I guess that they prove that opposites do attract.

I knew it! I knew he had some coyote blood in ‘em!

But how does he avoid naturally attracting anvils... O_o

I'm just not seeing Wile. E Coyote procreating. What coyote gal would want to have the pups of a guy who blows himself up ten times per day failing to put food on the table.

However if Wolfram is part coyote then it does explain his knack for creating a problem to every solution.

@Kangaar Foxfire: I've previously made the connection where Wolf has some relationship to a military officer named Wile E. Coyote, who's an EOD specialist. He sucks as a hunter, but he puts food on the table with his hazard pay. He's quite decorated...with an unusually large number of purple hearts.

"Hey, Wiley, is that minefield clear yet?"

"Not yet, I'm getting a sensor read on one more device..."

It might have been interesting to see an alternative outcome of the shopping cart crash with the DARPA booth.

"Wolfram Wolf...he has no training, no military experience...why would you want to give him a commission and an instructor's post?!"

"Colonel, have you seen this? This kid can weaponize ANYTHING."

I accept Silverwolf's headcanon as truth~ His ma looks sweet, I'd happily have some hot chocolate or mulled wine with her. I bet his dad would have lots of anecdotes from his studying days, too.

In CC we learn that Wolf's mother is as chaotic and accident-prone as he is. would love to explore their relationship more now that we know she's cute.

Man-oh-man! I hope I look as great as those two, when I get to "parenting" age!