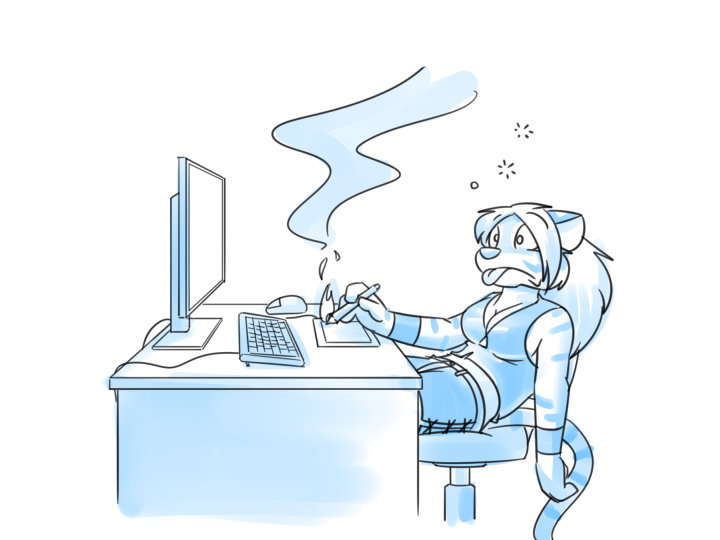 I am taking a break from regular comic updates to recharge, so submit AMAs (ask the cast anything), or simply ideas for me to draw (that must include either the Nine to Nine or Swords and Sausages characters). Please keep the submissions within the rating of the comic.

You heard boss, send requests which are at least 10/10

To Wolf: Jessie really seems to like you. What if you took her someplace where YOU would feel comfortable on a first date?

How would the cast react to the two vixens swapping personalities? Like, a Freaky Friday situation, Amber and Andrea spending a day in each other's bodies

As a wizard/sorcerer/witch you are entitled to a familiar. What is the best animal to have to ride around with you on your adventures, cat, bat, ferret or other? AND WHY are they the best?

Also doesn’t Jessie have a bigger gf we have yet to be introduced to? I seem to remember some old concept art

one question per char:

Andrea: has anyone ever meeped back at you by mistake?

Jan: do you ever lose food in your mane?

Tor: other than boobs, Is there a secret stripe/birthmark to tell you and Jessie apart?

Amber: did you ever getJan in trouble at work?

Phil: I’m told horses are anxious all the time but you’re the most normal of your friends. How do you do it?

Shiera: does it bother you that you’re low in the social circle? It seems like your friends only include you because of Phil

Wolf: when are you and Jessie making it official?

Steph: what was it like growing up with wolf around?

Fina: you’re the babysitter sibling looking after Steph and Wolf. How have you stayed sane?

Tor multi track drifting through Iowa on a Dash 9 locomotive yelling out the window there is more to life than corn.

Do you speak almost exclusively in Squeak when you're by yourself as well as around others?

(I'd also ask why she does, but I feel like that's been covered / would be a longer story than one sketch.)

Edit: Well, that's embarrassing. I can't even remember the names of people… Thank you, Panther.

Mr and Mrs Wolf where were you for your full moon?

Dear Jessie Tiger! I get the feeling that in one way or another, you were trying to establish a polyamorous relationship of your own. Mind if I ask if you genuinely believe in polyamory (in which case, we're soulmates), or you simply did that out of jealousy, because Tor chose someone else? I remind you that there are a bunch of resources for polyamory that you could look up (for reasons other than proving Tor he could still have you).

AMA for Phil : how do you deal with Shiera being on catnip ?

@jan take all the time you need. We arnt going anywhere. For AMA though, what is the best part about drawing all these great comics? And do you know if we will ever see a human in Vicki fox?

I have a question of wolf.

With the amount of crazy (and life threatening) contraptions.. um... Can I help build one with you? Please?

Is there any truth to the saying "Don't look a gift horse in the mouth?" How about "You can lead a horse to water but you can't make him drink?"

Wolf and Jessie going on a date and Wolf actually enjoying it! Turns out both are really into mecha

AMA @Tor: how do you keep putting up with all that (giant, lovelorn?) carp that's getting thrown at you?

@Brighttail: there's an actual webcomic called "Familiar" that answers this question (Jack, who happens to be a cat at times), but it's too R-rated (albeit wholesome) for me to link here...

For the Wolf: Given enough money, time and resources. Would you build a nuclear Reactor, or robot Girlfriend?

For the Wolfs Father:How’d you acquire your Type 2 Bus? And can I buy it off you?

What is Wolf's biggest boom to date. Because it's awfully bold to assume that he's peaked.

Jan.exe has borked. Please close and restart the application.

Steph, what are your intrests/hobbies?

Sketch: Steph wearing glasses and being cute in them

Meep fox in a Traffic jam.

What about a comic showing a giant delivery truck delivering first aid supplies for Wolf.

Steph you up for a round of "Through the Fire and the Flames" on Expert?

Dear Tor (Swords and Sausages), When was the first time you saw Silver naked? How many times a day has she ended up naked ever since?

Dear Wolf, What was the most embarrassing way one of your intentions backfired on you, your friends, and/or your family?