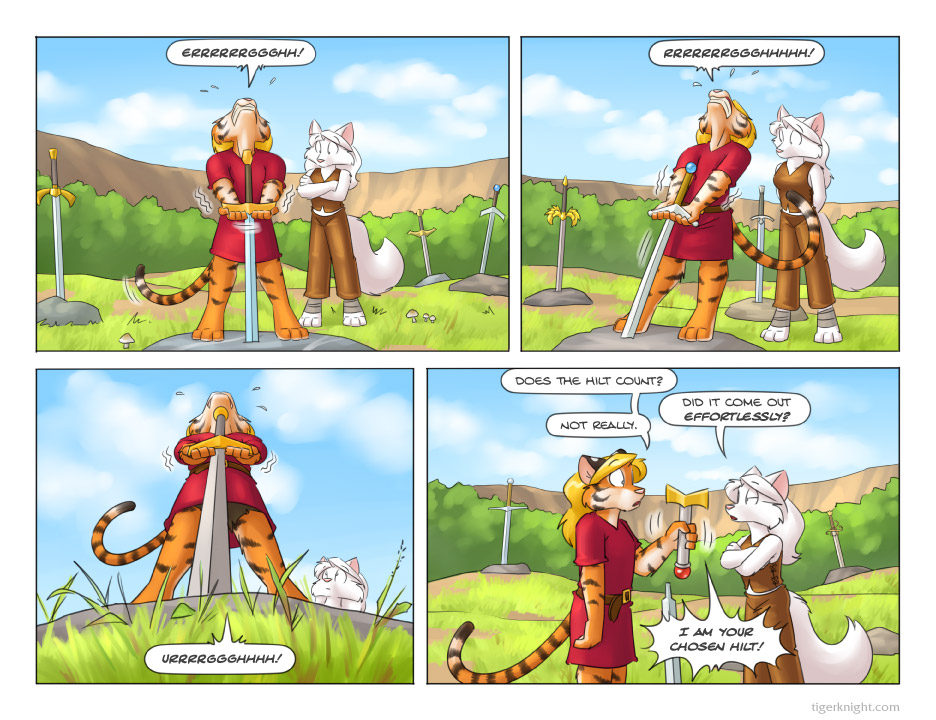 4
TOR: Does the hilt count?
SILVER: Did it come out *effortlessly*?
TOR: Not really.
HILT: I am your chosen hilt!

The hilt speaketh! What strange magic is this?!

Now THAT is MY kind of sword!

Surely, you've heard the legend about the magical hilt... plunged for eternity on the stronger-than-average blade... which was cast into a slightly-petrified stone... and buried in moderately fertile grounds over a millennium ago?

Ahhh rats, the warranty expired just yesterday....or it's the correct hilt and the wrong blade.

Cheaply made swords in a overprice sword holding stone.

Demo use only - NOT FOR RESALE. This demo unit is not intended for use in training, general sparring, combat or any other use where swords are used such as prying open chests, marking trees, etc.

Ask your sales rep for our optional Singing Sword and IdentaHilt prerecorded SoundSpells(tm), be the hit of any skirmish.

We put the clang in armor contact! - Hack'n Slash Inc.

Oh, the hilt speaks..., speaketh? As long as it doesn't start singing!

...Now I'm thinking of what Tor and Silver's ability scores would be... Adjusts tape repaired glasses.

quick throw it away before it starts to sing.

Gasp! He actually wears pants under his tunic!

Huh. A cheap rat-tang sword instead of a full-tang one. It's a good thing it broke when it did, because using that in a fight would mean one hit, MAYBE, before it fell apart.

Craftsmanship is dead. They just don't make swords in stones like they used to, I guess.

Can't be any good as a sword, the tang should be the full length of the hilt.

So cheap swords, with a bit of magic to make them seem powerful. Typical for what this crowd keeps finding.

Does just the hilt count?

I love the look on Silver's face. It's the look of, "You don't REALLY expect me to say yes, do you?"

Now that I look at that panel again, I can understand the hilt coming off. That's a mighty short tang for such a long hilt.

GASP I had hoped this might happen. It's perfect for Tor. Just take a firm stance and shout, "LIGHT COME FORTH!"

I can see it now. The blade that will make the comic title! They just need to find a butchers shop now and unleash the power of the sausage sword of Kul'BLAHADABIDINBINNIDIN!

And then you can watch it turn red as Tor decides to nickname it Blah.

I see Claymores, I see France… I see Tor's under… ummmm… I see his shorts!

Poor Tor. Up to his Hilt in swords.

Short tang...? Oh! So that must be the recently forgotten "Moo Tang Clang" sword. The real Hilt is actually

the stone ^^. Those swords are held backwards, you know...

Has anybody got a roll of duct tape ? Maybe some superglue ?

Now, see, that's why you should get a light sabre. If you pick up the hilt and there's no blade, just stick in a new battery. Use rechargeables, you'll save money in the long run.

I thought he was going to pull the whole stone out of the ground. :D

Singing sword hilt?! Is it the legendary Half Tang Tenor!!

@Sir Hawk: I haven't seen anyone flinging a Dragon Slave around, so I highly doubt that's Gorun Nova, not to mention Gorun Nova never spoke.

They don't make the swords like they use to. The either break, or you take the stone with you.

You know the dirty little secret, right ? They aren't real stones. Wizard digs a hole, drops in the sword and dumps in a sack of Quick Crete. So much easier than pounding a sword into a solid rock. Well, y'know, whatever works.

@Razmoudah: Of course you haven't seen anyone flinging a Dragon Slave around, that happened a long time ago...hence the crater!

Tor needs to try another sword.

@Silverwolf: Nah, if that crater was from a Dragon Slave you can practically guarantee that Gorun Nova got away. Also, don't forget that the Celestials took all of those weapons back at the end of the second season, so it was no longer in this world, and the copy version from the recent season just didn't have the juice for a sustained fight. It's probably more likely to be the blessed hilt of a cursed blade (thus why with his insane luck he only got the hilt, the curse couldn't latch on to him).

@FermentedSkunk: Yes, it is very light.

Ack, sorry. That was the third season when the Celestials took the weapons back. That's what I get for doing this first thing in the morning, things just don't always line-up right.

Man, is it just me or does it seem like Silver used to look so much more muscular in the beginning? Kinda disappointing she's lost her tone

But Tor, you forgot to say ‘Shazam!’ Or was that ‘supercalifragilisticexpialidocious?' Hmmm... ‘Birdmannn?’ ‘What is the air-speed velocity of an unladen swallow?’ ‘Kamehameha?’ ‘I'm gonna go build my own theme park, with...’ Errr nevermind.

Or maybe it was ‘By the power of Grayskull... there can be only One!’ is struck by lightning

I shoulda just suggested looking for the secret glyph key...

What if one of these swords is the artifact ?

With Tor's luck the artifact is the hilt he's holding. Of course, he doesn't know anyone is looking for it so he may end up just throwing it away. Even if he keeps it I still expect it to be a while before Silver and Tor meet the questing party. I was going to say "crossed paths", but they've done that several times without even noticing.

@Razmoudah That "crossing paths without noticing" thing suddenly reminded me of the movie "Hoodwinked". Lol.

Well a hilt without a sword isn't necessarily worthless. Guybrush Threepwood managed to finish a puzzle with one in Escape from Monkey Island (just before he lost the hilt down a sewer), and if I recall correctly there was a ruby-encrusted hilt in an extended version of Colossal Cave which counted as a treasure item.

@Katnik: I've seen the trope used a few times, mostly in animes (Hoodwinked is one of the rare times an American company has used it, amazingly they actually used it well), although I have also seen it done in a couple of games.

Maybe they've been trying the wrong approach. Tor should try pushing the sword instead.

I wonder if it'll object too much to being re-purposed into a back-scratcher?

"I am your chosen hilt!" Probably the artefact •.•

For example, you have a cold iron blade. Deadly against fae. However, it needs more. So, you try to enchant the blade, and it the magic won't stick.

So. at which point you have the following choices 1) Carving runes into it (and optionally fill those runes with magic conductive metal),possibly throwing off the balance of the blade, or weakening its structure. Also, those runes are likely to get damaged in combat. 2) Enchant the hilt. Heck, you can enchant multiple parts of it if you do it right. A Gem in the Pommel for strong magic and A Grip/Tong for better grip. I wouldn't recommend enchanting the Cross Guard, as it often takes damage in combat

The choice is quite obvious.

I remember when a GM gave us a overly ornate, but extremely sturdy, hilt as a treasure. The fighter took it and had a blade forged for it. At the time, the player didn't know it was enchanted.

Then, one day, after a horrid number of whiffs, against a Giant, he said: BLASTED SWORD

And a blade of lightning sprung from the hilt, propelling the other blade with impressive force. GM told him to roll and attack roll, and BAM Critical Hit. The Blade went into the forehead of the giant, felling it.

NEW FAVORITE WEAPON GM ruled it as a Crossbow, Full Round to reload (without Rapid Reload). Damage and crit was equal to the blade.

Hilt was enchanted to accept any sword blade, or produce a lightning longsword upon command.

The fighter then proceeded to carry around a haversack of blades. All kinds. He once launched a Great Sword!

Unfortunately, the game died out a session after that.

Now for the chosen blade ...