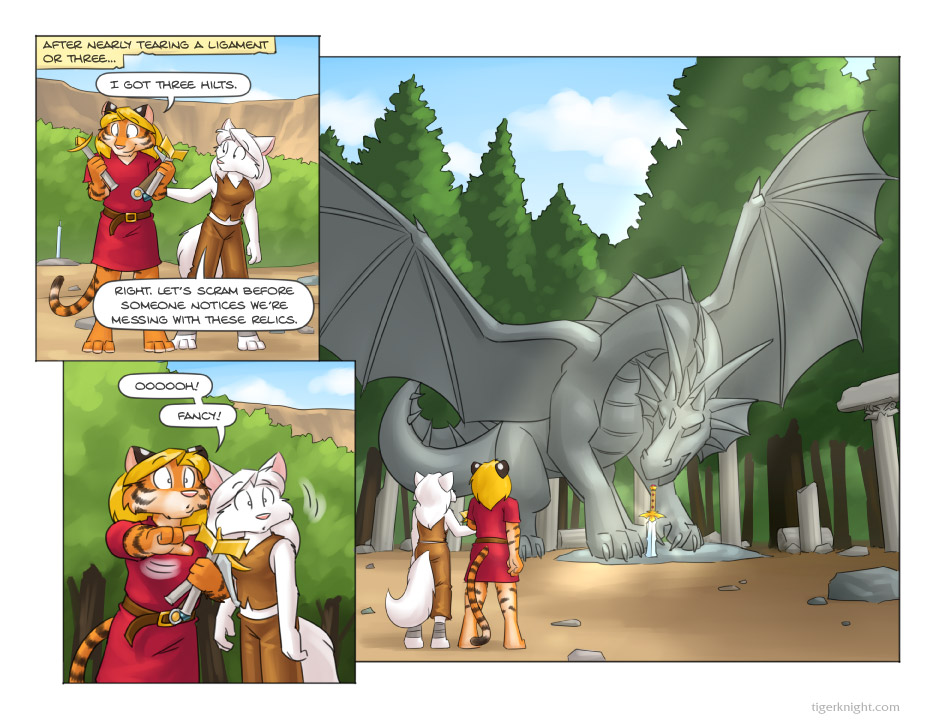 "Oooooh as in surprise and alarm!"


What could possibly go wrong


Oooooh indeed!...hold on a minute. Tor and silver are making this as a video series right? Where did they get the huge monolith stone dragon?!?


He's easily distracted by anything shiny, isn't he?


My bet: One or both of them try climbing on the dragon's back and riding it like a pony. Anyone want to take those odds?


"Oooooh as in surprise and alarm!"

I'm literally dying of laughter, especially considering how I just watched the movie the other day. Thank you for this, Jan!


Drum roll as it takes 5 panels for Tor to make it to the sword, panting heavily, while Silver is standing next to it looking at a non-existent watch.


This can only end in good things.


Tor is the poster child for ADHD.


I predict Tor will pull that sword from the stone. Much elation will follow, until the dragon comes to life wondering why he is stealing a sword. Lots of flames and running away as clothes are burned away and we see more boobies.

Morale of the story, Tor goes through a lot to get Silver naked when all he probably needs to do is get her a leather vest.


Tor is going to end the world when Arthur comes, and finds his hilt missing.


WAIT! NO! That's not Arthur's sword! That's Shrek's! I can tell because of the look of the dragon... It's the sword that Shrek will use to slay the dragon.


"Where did they get the huge monolith stone dragon?!?"

Sixty-Four words: Take a tiny dragon statue out into the woods. Set it on a table; shoot a close-up of it from a low angle so it looks like a giant dragon statue. Shoot footage of our "heroes" in front of a greenscreen. Use software to superimpose their image over the film of the tiny dragon statue. Bam, looks just like panel three up there.

Some advice: If Tor & Silver weren't standing in front of the statue, the whole thing coud be done as simple forced perspective (Google that) with no greenscreen.


Dragon: "Ooohkay...um...it seems that even as unlikely as it seems you are the worthy wielders of the sword, and I shall be your ally as the emissary of dragonkind and...um...okay, I suppose I shall have to wait a while longer while my feline and vulpine bonds exit a state of catatonia...oh, perhaps this lupine scholar can jar them to lucidity!" Wolfram: "Certainly! FIRE IN THE HOLE!" BLAM


Hmmm...I think that Tor will pull off the tilt, consider the shiny value of it and replace the tilt with the curse charm on the blade leading a start to some weird adventure around the four who got the prophecy...


@AlyxVixen Pretty much everything :D

@Brighttail But she is already wearing a leather vest. Maybe he couldn't figure out how to undo the lacing :P

@Perfesser_Bear @dracone Funny, part of Tor's personality resulted from when I showed an early draft of him to my animation teacher in college. She (incorrectly) said, all tigers act like they have ADHD. So I reworked his character to be a bit more distractable.

@Klepter @Pango the Wolf This is the "real" version of Swords and Sausages, not the YouTube series from Nine to Nine. Different universes. Real magic. Confusing, I know X)


It might be guarding the entrance to the cave of "Caerbannog" in which the directions to the castle of "Aaargh" are hidden, just watch out for the monster with it's big sharp pointy teeth!


Let's see, now - desecrate three powerful magical artifacts, jam a bad-luck generator into the socket of a magic amplifying device, clamp all this into the sweaty paws of Tor, past-master of disaster,and drag the whole kit'n'kaboodle under the very snout of the "statue" of a dragon whose facial expression could be read as "bring it, sucker !". Then try to rob said dragon of his own treasure. Ah, I don't see how anything could possibly happen. I got nothin'.


Now I see: The dragon slew the stones with swords, until the stones petrified the dragon.

Tor pulls, Dragon awakes, too much Momentum knocks the Dragon out.


Given how that dragon is positioned, it seems swords of prophecy are really quite delicious!


@Jan but real magic is so confusing.


@Klepter It's plaster and chicken wire.


Weird ; why the blade of the sword makes me to think to stormbringer (Elric's sword) ?


Lets see, big dragon that demands attention with the shiniest sword there? Check. I wonder why they haven't seen that until now?


Duude, what a shiny sword!


What could POSSIBLY go wrong?


@Vanbael: Tor wasn't holding a Super Bad Luck Hilt until after he swapped the gems in the hilt, so his natural good luck kept him from spotting the most dangerous sword until now.


Everyone is asking the wrong question. This is Tor we are talking about. The question we should be asking is "What could go right?"


He manages to slay the dragon as he draws the sword, thus keeping him from getting eaten and/or flamed? Or else the dragon takes one look at Silver/Tor and instantly falls in love and joins them in their 'quest'?


@ndrvr, @razmoudah, @Panther: There's a much better option, along the lines of the Anne McCaffrey "Dragonriders of Pern" novels...that the dragon not only awakens, but bonds with one or both of them. Although the telepathic link might be problematic in the beginning..


@Silverwolf, riding that dragon might be a pain in the _ _ _ , considering the razor-sharp spine running from head to tail. A guy could end up with a split personality.


Hmmmmm.......maybe, but the dragons, and firelizards (no, they aren't the same thing, though they are related, through science), typically only bonded when they hatched. Also, it could be very difficult to make a saddle that fits this dragon. I still think my second option, of the dragon falling in love (sorta like Dragon from Shrek), fits the setting, and Tor's pattern of luck, better than the bonding, but it could definitely work. Then again, maybe Tor will be lucky enough to get both options as one? Not that most Pernese dragons didn't end up loving their riders (though not as eros love, the Ancient Greeks had it right with distinctly defining three different types of love), but I was thinking as more of a spur to Silver/Tor as to what her/his feelings toward Tor/Silver are. Then again, if it is as deep of a bond as Pernese dragons and their riders shared then the dragon would know the answer and could nudge Tor/Silver into revealing the truth for fun.

And here my first thought is how many pigeons could be waiting for them behind the wings on that statue...


I find it odd that nobody has noticed the position of the dragon, although Arc Nova did say the sword looks delicious to it. Drawing the sword upward from the stone would put Tor's hands and arms in the open mouth of the dragon, along with the sword's hilt (not the blade, so no danger to said dragon). Thus, the one who draws the sword from the stone becomes dragon chow. Of course it's a pretty sword, an ugly one wouldn't make good bait.


Blegh! It's not single-edge! What kind of sword isn't single-edge! I mean, unless they actually intend to use a shield, the only way to duel with a sword is to use it defensively. All it takes then is bad leverage or a stronger opponent and they can force your sword onto you and cut you with your own sword!


@JD: Are you sure the dragon wasn't singing Karaoke into it?


Has anyone noticed the dragon looks like it is smiling?


Tor put those hilts back those are sacred relics! (also hey wassup it's my first time in the comments oh snap)


Poor hilts. This is why you want full tang blades with peened pommels.

@Panther - Maybe the dragon's a convertable?


That's some impressive prop design. Is that mostly paper mache? Fiberglass and plywood? Or is it a matte painting/cgi?

Sometime I'd like to see a creator's commentary episode where Silver and Tor do a voiceover of past strips. Or talking about behind-the-scenes antics for their favorite panels/scenes.


Why did they place the dragon in the middle of Stonehenge?