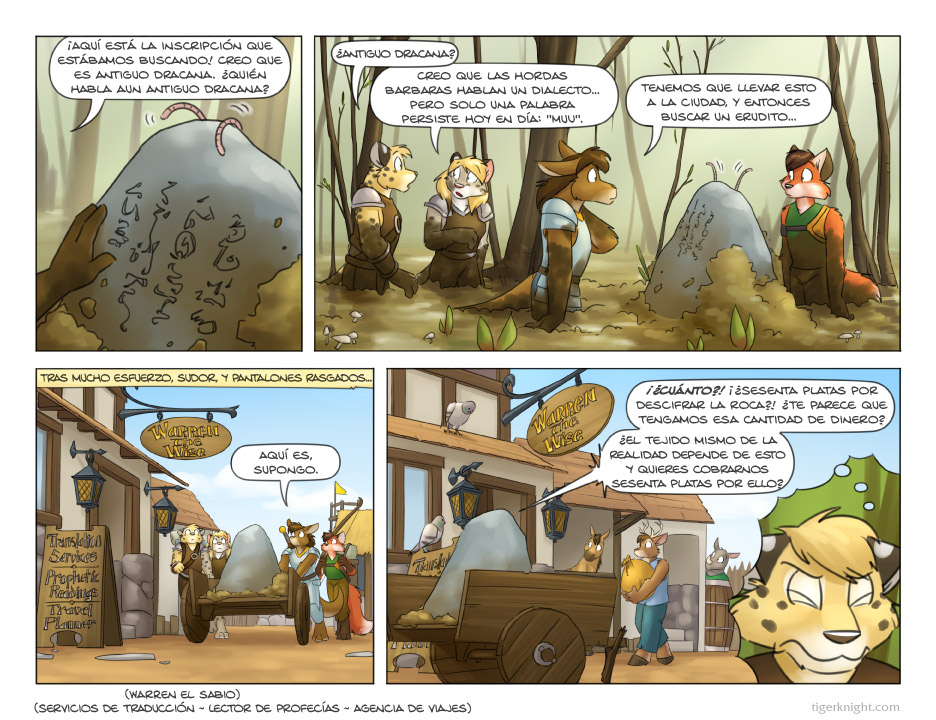 They could always just wander around the area, slaying monsters as they go. But it's entirely possible the monsters in that area only drop copper, so they may be out there a while... I hear danger grows when one crosses a bridge though, so that might be viable, if they're strong enough.

I guess any way you slice it, it would be a long and arduous task. Provided they actually decide to console a commercial prophet, that is.

She didn't have any problem conversing with the barbarians, so maybe she speaks it?

Well, you could go GTA V on this situation. All you have to do is stab 6 people, and run to the nearest roof and wait till the guards leave. Then you have your 60 silvers!

Also, having 1 Silver is a bad idea as is. But having 60! That's almost as dangerous as 4 Tors!

Even when there's trouble there's always someone wanting to make a profit.

Why are they paying retail for their prophecy when they could just go to the coast and pirate?

Well, a prophet has to make a profit.

Hee! :) Lookit all the WoW players. I was going to make such a quip, but I've been beaten to it, several times over.

See! This is the trouble with trousers. Too tight trousers tear too trickily to Taylor! Forgo finicky formal wear and frolic freely, free of form fitting frockery! Short shorts show society that amicable alterations are acceptable anywhere good trousery tears to tatters.
So cut 'em loose boys! Short shorts are in this Summer!

@Jade You've been talking to the barbarians, haven't you? They don't seem to go for trousers either.

That solves the mystery of the utterly complex barbarian language, but not the problem if this kingdom really has more than one Silver (a shuddering thought). So several weeks have passed since then, and leopard guy** spent all his money on an axe instead pooling every coin? Geez, some heroes they are :)

**Jan, I hope you are going to name these guys eventually?

I hear that a scholar in the next town do this for 1 gold, 10 silver and 42 bronze

60 silver coins!? Do you have any idea how goblins I'd have to fight to earn that!?

Hey look the lepored is thinking of how well that would turn out meheheheheehehehehehehehe Pestamests we don't always think the worst outcome in every thing just most every thing.

What happened to the Worms? They seem more intelligent than those four!!

Frank: 1 gold is typically 100 silver (or zero if Silver is around :P)

"...how much silver was it i spent on that bird axe again...? ...and that awful hangover nonetheless..."

Even the best Prophet isn't able to predict a few things in life ^^...

Maybe Spotty could hock his axe . . . On second thought, those worms seem to be involved in this. So ask them. All you gotta do is find someone who speaks wormish.

Is the leopard guy imagining the last two panels?

If they are "bandits" why don't they steel that money or kidnap the scholar and for him/her to translate it?

Unless they are honest bandit ?!

They're a bit too quiet to hear but I'm pretty sure the worms are saying: "Welcome, travellers. We are the guardians of the Prophet's Rock"

pulls out magnifying glass Oh my! Well I’ll certainly have to sell my part of THAT timeshare...

And actually, I think the worms are just dancing their cares away... up on prophet's rock. ;p

It should be 100 silvers to 1 gold, but the value of silver varied so greatly (relative to gold) that it was at one point, 142 silvers to 1 gold, then it rose to 49 silvers to 1 gold. Don't even get them started on coppers, it varied between 66 and 277 coppers per silver... which gets super messy when you factor in multiplication...

Jan got more or less viable system there, at least, silver coins often wery were varying in price relative to gold, why surpisingly, copper was more constant. Was reason , for example, why rusian Tzar, one that came after Ivan the Terrible, tried to reform system, replacing silver coins by copper. For simplicity to continue with same example, in imperial Russia, 1 ruble was 1.19g of 83th grade gold, being 100 kepeyka, so cost of 1 g was rougly 83.4 kopeyka. Coins of 10 and above kopeek were silver (10, 15, 50), but fixed by law proportion of 1:15 between price of silver and gold made silver coins more valuable, due inprecise mass and grade. E.g. 10 kop were more than 0.8g which made them value more that 1:15 of ruble in silver. That was messed up with fact that in later coins purity of gold and silver was better. SO... provided there were exchanges and a law allowed to mint coins "domestically" ("Right of free mint"), the choice of metal to pay with was important.

How much was that giaaaant war axe again? :D

@Mako Very much-o :D Also, Tor took some "spare change" from leopard guy; how else could he have paid for the room at the inn? :)

@Jan - Well given Silver and Tor left the hotel room by ummm, expedited means, I assumed they just "forgot" to pay the tab :-D

Nice to know Tor is able to get a few coins out of beyond completely inebriated adventurers. +1 to a random Rough Skills!

I volunteer to help the young lady clean up...

Okay, what's throwing me is the thought-bubble type frame in the lower right versus the narrative time placement in the lower left panel. Is the leopard still in the swamp imagining the scene with the scholar, or did they return to the swamp? Or is this whole thing in the leopard's imagination?

reading the tablet "For a good time call Smaug at..."

@Indagare @Silverwolf It's a flashback. It'll become clearer on the next page (darn this start-stop-start-stop webcomic format...)

...Are the worms waving at the fox and roo in the second panel?

@Antarian_knight I think they're trying to communicate the significance of the inscription to the band of adventurers, who unfortunately don't speak worm.

@soriac Yes, they have names. They'll be revealed on the next couple pages.

Wait! I took "Barbarian 1" waaaaay back in junior high! If I'm not mistaken, the inscription reads "Eagles may soar, but weasels don't get sucked into jet engine intakes." Hope this helps.

When I read barbarians saying "moo", in my head I don't hear an actual mooing sound, but someone actually saying the word "moo" very matter-of-factly in an upper-class English accent.

This sounds like an good chance to have some of the donor characters make an appearance. Wizards typically are known for studying some of the more exotic languages, so maybe they could stop by the nearest wizard school if there isn't a local wizard they could try calling on.