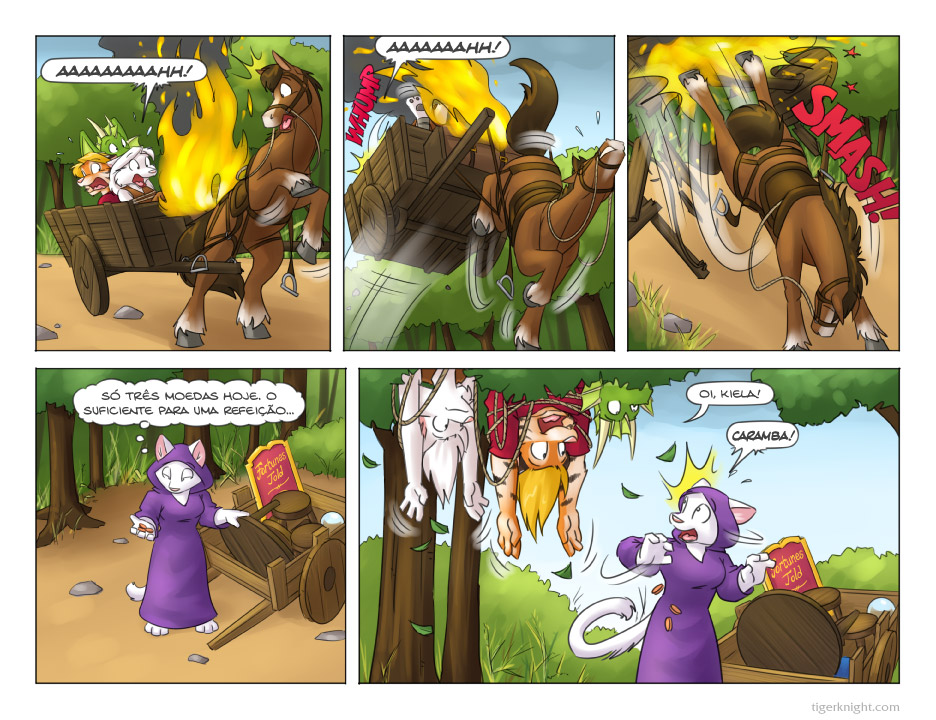 The S&S party crashers comic is up, in case you missed it ^^

Kiela, obviously, did not see this in her own future. :=3

Later after the Sheriff returns:

Okay, that is the last time you join me eating chili.

Heeey! It's our favorite kitty-cat soothsayer!

In the beginning an Apple dangled in a tree/ Now full circle, Dangle our heroes three !

Don't be afraid , Kiela ; it's a normal day for Silver and Tor

Hey Kiela - some people just dropped in for a visit!

Lots of screaming, lots of fire, lots of mayhem and the return of Kiela. Yes, just as foretold by the ancient scrolls of the holy Page 30 ;-)

@LionkingCMSL: she only made 3 coppers, maybe she couldn’t afford herself...

@LionkingCMSL Evenone expects them sooner or later, just not twice in the same day.

That's not how a lynching is supposed to go!

@Shockwave07 "Later after the Sheriff returns:

Okay, that is the last time you join me eating chili." ROFLMAO.

Business is like a low hanging fruit, like 2 Misfits with their little Dragon. If that last minute Job doesn't cut it to lunch, Kiela may still hold them in custody for the Sheriff (100 copper reward) ^^.

Sheriff is really going to be P.O.ed when he finds out his prisoners are missing, his cart is burned, bucked and bashed, his horse ran away, and he is all out of valentine underwear.

Well someone needs to re-evaluate their pricing structure... and learn about 'conjure food' spells.

Apparently, someone would not have predicted this. :D

And just look at poor Bapple's eyes. I've had days like that... usually involving anvils or roadrunners. Hang in there little guy...

Oops... That's just part of his snout. That's what I get for checking from work on my old low-res monitor.

puts on old-west robber's mask OK. This is now an upside-down stick-up... ;p

@WB101 That kind of sounds like an old Abbott & Costello routine. You know. "That pillow is filled up with down."

This gets more amusing by the day. On that note, I wonder what it would be like if they were to end up an adventuring party. I have a feeling their group would be highly dysfunctional, in an amusing way. Let's see here; they'll need a a warrior-type, a mage of some kind, a healer of some kind, and they already got covered with the being rogues bit. Granted, they don't be to very good, or competent, rogues, not sure which it is at this point. We'll need to see them dungeon diving to get a better idea as to just how effective at their jobs they really are. Probably could make a whole comic of it, you definitely got plenty of supporter created characters that we're all probably more than willing to see show up in a story or two, even if it's a cameo type appearance.

dracone: similar to the adventuring party in "By The Book"?

Jan, dracone's comment gave me a wonderful idea. If you'll recall the drawing you did of My-Rora and Zo-Kyta, you could have Rora saying, "Tor! I've heard of you! Get away from us! NOW!" After all, Rora and Kyta are dressed for the era depicted in the comic, not to mention he carries a sword.

@drivernjax So who is back on first again? ;)