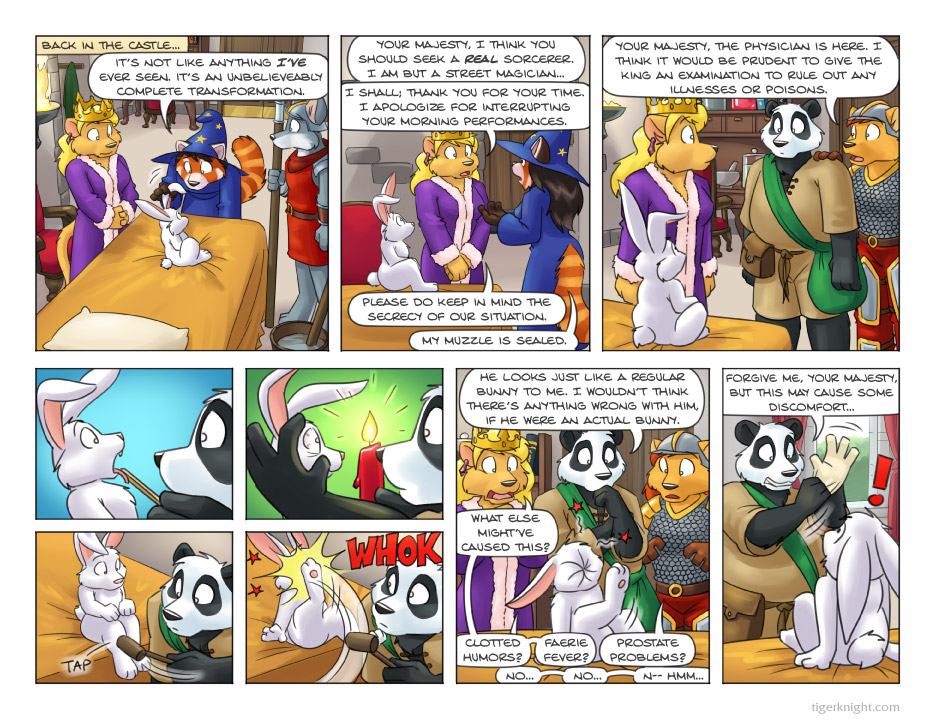 The King is not having a good day...

Edit: I forgot to upload the high resolutions pics; they'll be up on Monday (they're on my work PC).

Edit edit: The high res pics are up.


Not many do when the doctor put on the rubber glove.


Wonder what that glove is made out of and how was it sanitized? Lets hope this doctor knows what he is doing! :)


hopefully the queen will stop him before he goes any further, due to the utter ridiculousness of the suggestion.


How do they know this is the king again?


@Brighttail The glove is made from the blessed cloth from an Ordained Healing Temple, and sanitized by magic!!


I love the King's face in the panel eight , even if i think he's not really enjoying it himself ; and the worst is planning in the last panel

The question is how the panda has a plastic glove ? Wolf has invented a time travel thing ?


Well, at least the king isn't hopping mad. Just have to remember that the bundle of care it's required can be hair raising at times. :P


I like how calm he seems for the first six panels.


...natural rubber might be possible in this setting. Actually, I'd prefer not to think about sheep intestines... they were used to make these larger-than-a-finger not-a-toy-toy balloons, if you catch my drift ;)


May not be the king. The curse may have been a switch-places teleportation spell. The king himself is currently stark naked in a field full of clover with a half-million perplexed bunnies surrounding him, wondering how their king was transformed into a lion.


Would it have been better if the physician was a duck? Because he's sure <i>acting</i> like a quack!


Are you gonna stick a finger up my bun?!


They should have Bullwinkle pull him out of a hat, maybe he will turn back into a lion. Or a rhino. Never know with these fractured fairy tales.


Kermit the Frog may tell whole books of having a hand stuck up the butt XD...


Yeah, he's about to be in a BUNdle of discomfort and embarrassment. Prostate exams always are RABBIT uncomfortable. Also, from full-body transformation to sexual health issue, that's quite the mental LEAP, if you ask me.


Hey Snark, you forgot the best part about the larger-than-a-finger-not-a-toy-toy-balloons made out of sheep intestines. They were reusable. Just clean them out and let them dry and you were good to go again...

Now ain't that a nice thought?


@ Guesticus Better yet Make him Ludwig Von Drake. He for got to blow into the eye. (the puff test for gluacoma). They should do an x-ray as well. Many even a roscsha(bad spelling) test (sychological [spelling again] test)


So, aside from the material, where do you find a three - fingered glove ?


@ Katnik The Robot depart. (clothing store) or when you need to keep the robot arm uncontaminated from what its handling. (like when they cover the dental x-ray machines between paitents.


If he (the king) now joined the royal guard he'd gain Judy's Perspective after already have a view from Mayor LionHearts.

AlyxVixen said that the glove was “sanitized by magic!!” But... what kind of magic? Holy/Light? One of the Elemental types? Toony? Etc.? It makes a BIG difference... O_O


Well, OTOH errrr i mean Paw ruling a kingdom will leave you with a foot in your mouth every now and then...


@Matt: It makes me wonder whether there isn't a magical equivalent of an MRI. A mage would likely learn the sciences, as to understand the forces of nature would lend itself to better manipulation of those forces. So, a few spells to noninvasively analyze the structure of tissues with an illusion spell to generate the image, voila. You have magical radiology, sans cancer risk from X-rays.


@Silverwolf A master of the arts could also conjure up a pair of X-ray spectacles, but one must be very careful with their attunement. Too little, and only the clothing seems to disappear. Too much, and one suddenly seems surrounded by malevolent skeletal warriors, which could lead to dire consequences if one happens to be somewhat... paranoid. O_o


That last panel!!! XD I saw that and Perter's prostate exam (Family Guy) popped into my mind...

Wonder if the guard is going to need medical attention for suggesting the prostate exam?


When will the next page(s) be up?


@Gamintime I need to buy more time for the next page, so the contributors' comic will be posted by tomorrow. Waiting for art feedback ^^