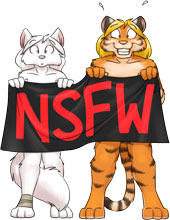 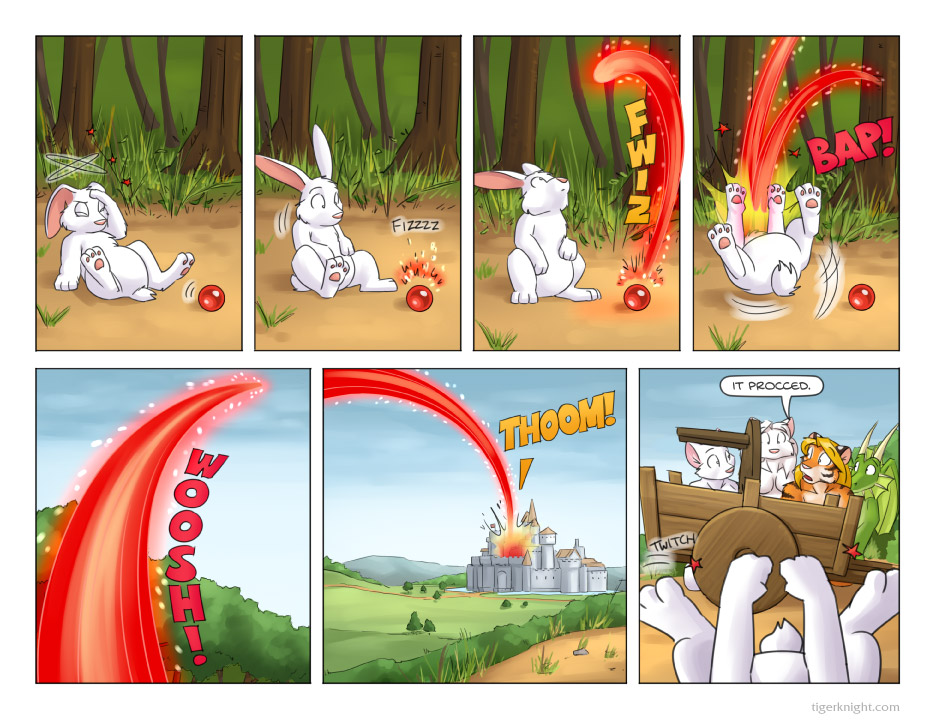 The bunny is having a really bad day. Unleashed magic goes BAP!

This comic was revised on 4 Sep 2017. Comments made before then refer to the old comic.

@Kangaar Foxfire; Well, if Scientific progress goes "Boink", it would seem to follow that Magical progress would indeed go 'Thoom".

That bunny is too adorable to eat. I think it should be another pet for the party instead. And who knows, contact with a spell might give the bunny magic of its own...

The real questions are: Which castle did the magic hit, and what will it unleash/curse now? :=3

Welp, there goes the castle.

@LionkingCMSL; And was the Sheriff in the Blast area?

@Antarian_knight Heh I'm glad someone caught the reference. Ty :) And yes that bunny is far too cute to eat.

I had to look up procced...

As much as I play games never heard the term!

I think they should start running right now.

Let's see what the magic did with the bunny. Maybe Tor needs to throw the holy hand grenade of antioch at him.

The real problem is, what is Silver going to eat now, after the bunny has been established as a cute little critter and is therefore protected by the cuteness law of animals? It seems it's back to tiger for dinner...

I never thought I'd hear "procced" used by characters themselves... :)

Suddenly, meta with the word procced?

@Antarian_knight You forgot the other important sounds of magic, i.e. fizzzz, fwiz, bap, and woosh.

The magic bounced because if one rabbit foot is lucky, having all four still attached, gives the bunny 'Luck X 4' stat bonus!

@Leak @RCRuskin This is literally the first time I've seen that word in my life. Anyone care to fill me in?

I think it was another dream from Jan ; remember his post for this strip :

I think I know where the stone went, it wants it's hilt back and is now in a pitched battle with the bad-luck charm. Wouldn't want to be the Adventurers just now. The good news is, they don't know where the thing came from, just a blast of red from out of the blue. Headaches for everybody, on the house! (or what's left of it)

The ultimate harebringer of doom.

@jprime Procced means to cause a special event occur.

The puns were slow coming, but they'll be rabbitfire soon.

Surely it's fight between the real gem of the sword and the bad luck gem Tor had putted in the sword ?

@jprime (and others) 'procced', afaik is a bit of MMO slang. I've heard it mainly used by WoW players, but I have seen it on other ones as well, as well as a few SP games with similar systems. Basically, some players and items have a special ability or effect that doesn't go off 100% of the time, but on a lesser chance, and/or requiring a particular condition. If the ability/effect activates, it is said to have procced. I forget the actual term that bit of slang got created from, though.

What is that? bitchslap materia?

Yes "procced" is basically an added attack or an ability that happens after a successful hit. It can happen all the time or a percentage of the time. In this case the initial attack (Tor throwing the stone) hit the rabbit. The resulting bit of magic was the "proc".

Now what the 'proc' actually does and who it hits is still anyone's guess.

I want to know if Silver still wants the rabbit tho? She has to be still hungry, right?

Thank you Brighttail for explaining, because I never knew that was called a "proc" despite having known procs (certain weapons and skills in Star Trek Online for example).

@Brighttail Things killed with magic taste weird or have an odd texture. Like, fizzy meat and elastic vegetables. And the aftertaste is outright bizarre ;)

@jprime Know this because I asked Jan on Furaffinity, but it's pronounced the first way. Short O sound into a K.

That crystal must have been a coordination compound of WOLFramite.

Bunny: Ow... What the.... gest knocked over from magic

Sheriff: survives explosion "THIS IS ALL TOR AND SILVER'S FAULT!!!!! GAAAAAAHHHHH!!!!!! *submits even MORE incident reports to Vale Valley WCB.

Prince of Vale Valley: loses yet ANOTHER ice cream cone (can the poor guy catch a break?)

Imagine the Sheriff standing in the castle like James Kirk in "Wrath of Khan" roaring "TOOOOORRRRRR !!!" ^^

....somewhere else in the universe, all of a sudden millions of voices gone silent. Yup, that was no moon. It was just a darn Gem.

No matter what happens : for all the World , it's Tor's fault XD

Oh sure. It would proc on a level 2 critter like bunny rather than something like level 10 area boss Big Fishy (always procs on the trash mobs and never the boss)... ;p

@Jan regarding “things killed with magic”... that totally depends upon the spell used.

While ice spells tend to give a freezer burned taste, fire spells a charred taste, and lightning spells a singed taste, I find some spells like ‘Rain of Anvils’ give certain things a delightfully tenderized texture.

It hit the prison cells locking up the barbarians. we still don't know which castle it hit. This means war. Moo mooo MOO MOOOooo

@ Alyx Vixen don't forget about the other two towns that are at war and have determined the "Vale" sided with the barbarians.

The Thoom was bad luck and good luck anililatting each other. The citizens have now beeen infuseed with magic.

After all that if nothing happens we can assume all the good luck of the rabbit was used up. now it will just be bad luck. Did it hit a black cat in town now giving everyone good luck. Mooooooooo

does the force knock you out and bounces from person to person bouncing around until it runs out of energy or knocking out the enter population on being at a time?

The rabbit isn't dead yet that twitch might mean the rabbit will unconciously kick who ever tries to touch it.

The rabbit now have the power of the red stone/ ruby. The rabbit is going to need to control a force or power that strong. Will the rabbit join the team?

Maybe turning the rabbit from mere fastfood into fast and strong food. Who knows. Or fast and intelligent food what were kind of disgusting.

I wonder if the bunny's name is Fu Fu...

By the way , Tor had putted the gem with the bad luck charm on one of the hilts taken by the adventurers group . So , why this red gem is doing it ?

Pikachu, I choose you!

The link to the old version of the comic only gives a 404 error.