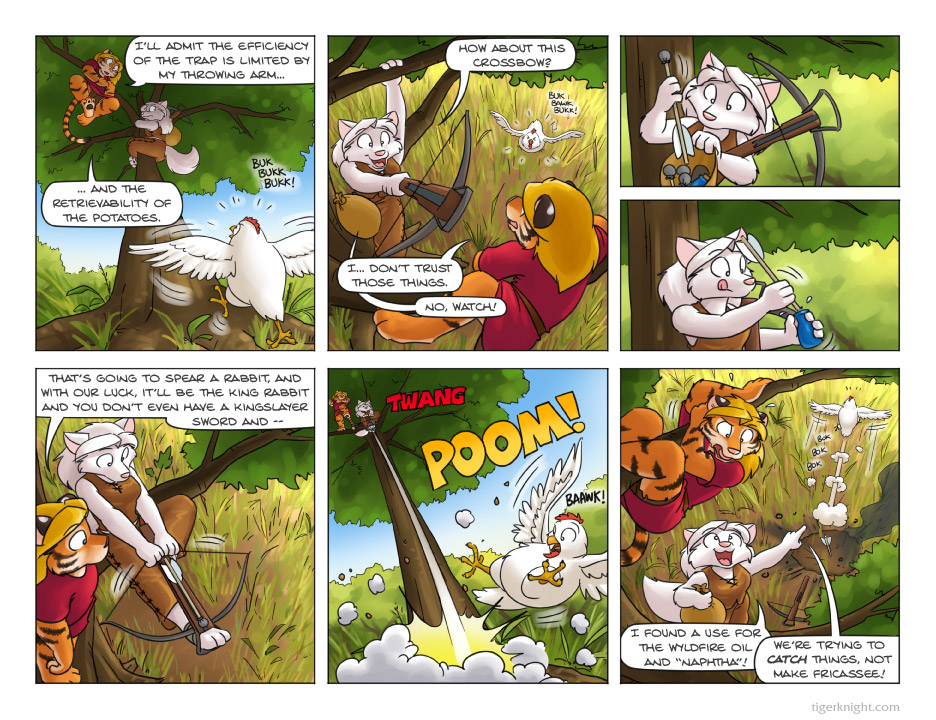 1
TOR: I'll admit the efficiency of the trap is limited by my throwing arm...
TOR: ... and the retrievability of the potatoes.

2
SILVER: How about this crossbow?
TOR: I... don't trust those things.
SILVER: No, watch!

5
TOR: That's going to spear a rabbit, and with our luck, it'll be the King Rabbit and you don't even have a Kingslayer sword and --

7
SILVER: I found a use for the Wyldfire oil and "naphtha"!
TOR: We're trying to *catch* things, not make fricassee!

This is the last update of S&S for 2019. I'll be posting AMAs and other sketches where possible during my travels. Next S&S update is scheduled for Jan 12.

You can watch a replay of this page's coloring stream here (video expires in 7 days): https://www.twitch.tv/cartoonwolf/videos

I vote for fricassee!

How did she not shoot her toes?

Good thing Tor refused to take the crossbow, with his bad luck (charm) he'd have blown the tree to bits ^^.

Next comic'll be all about "winner winner chicken dinner", right?

Treed by a chicken; there's a message here, folks!

"What could possibly go wrong?..."

It took me a couple of times reading the strip till I noticed the crossbow launching and hitting the ground. LOL.

@William No, she coated the bolt's tip in alchemical explosives. She's still holding it in panel 5, she apparently dropped it between 5 and 6 when Tor leapt onto the branch and she picked up the bag and turned to talk to him.

I wonder if that's the secret mixture to make exploding sheep?

This is similar to a device used in the TSR novels, The Cleric Quintet, where the cleric Cadderly invented a hand crossbow who's quarrel's had small vials of oil of impact under the tips, that would be crushed and explode on impact.

Those are pretty good arrows, to blast such a hole without getting destroyed themselves

I wonder if Silver and Tor know that they are fox and tiger? You know, predators? As in they hunt chickens? Without a need for crossbows?

Don't see anything questionable at all. Might be a bit iffy to COCK it, with the bolt on it like that. But I see nothing strange about firing it.

Ummm, Jan, Tir, and William. The stirrup is for cocking the crossbow without ramming the crossbow butt into your gut, which gets real old after about a dozen times with anything above a fifty pound pull.

PBOF:- just as long as she takes her foot out before shooting

But she didn't take her foot out before firing. Look closely at panel 5, she still in the same pose as panel 4, with her foot in it, and the bolt has most definitely been fired.

Yeah, well ... there has to be a certain amount of tip rise over the bow (prod) so the down feather won't affect the aim of the bolt by hitting the bow during its travel down the stock (tiller) and her foot in the stirrup should be (and, yes, her foot shouldn't be in the sturrip during firing) low enough so it doesn't interfere with the feather and one of the fine points of a crossbow is that the bow string, when released by the trigger lock (nut) always has the same draw, thus increasing its accuracy over the standard bow and arrow which depends on the arm and back muscles of the archer ... and it is a cartoon strip, after all.
Hmmmm, which has me wondering, why do we ask for more accuracy out of humor than out of real life?

you realize the chicken thing is probably a zelda refrence

@PBOF: A couple of observations.
With that pouch over the arrow head the arrow sits high on front of stock, raising the flight path.
Second; she released the string before it was cocked, she was still pushing down with her foot. That's why the crossbow fell.

That is not how you crossbow