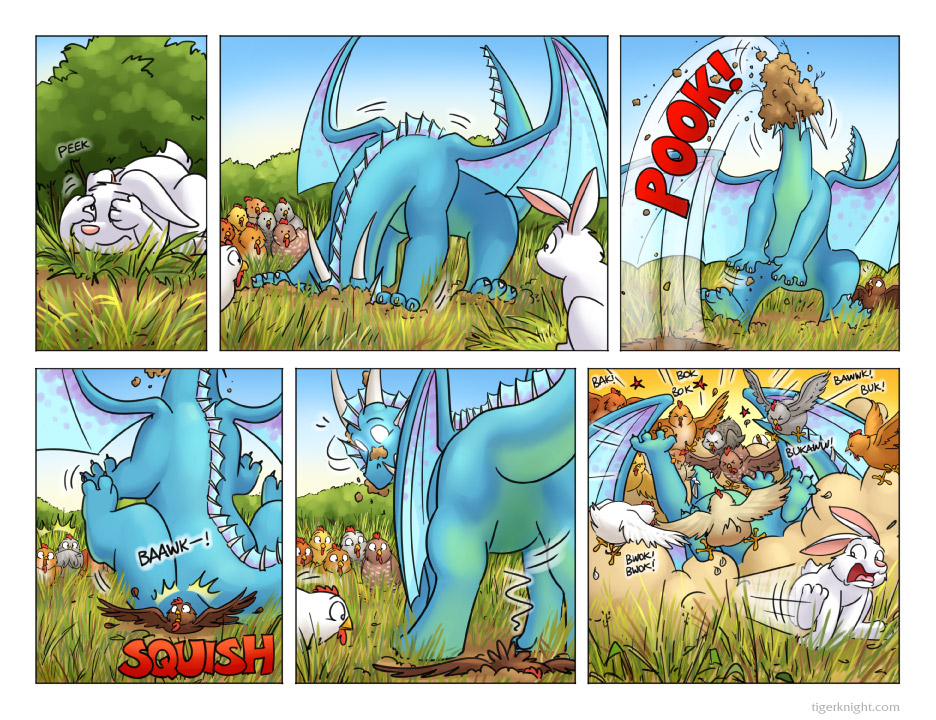 "Mrs. Tweedy! The chickens are revolting!"

Chicken pile! Thank god ultra mega chicken is only a myth, otherwise draggy might have some bigger problems. :o

Attack of the killer chickens!

Not even a full grown magical dragon is safe.

I do like how in the 5th-panel momma dragon looks mortified that she sat on a inncoent chicken.

At least King Rabbit managed to butt out.

Next stop: crossroads! Because meeting of the quadruple mayhem (Silver + Tor, Cless + buddies, the Sheriff + staff and...Kiela to the rescue!).

Ooh, what a way to go... Squished by dragon butt!

welcome to hyrule, where chickens are invincible badasses who will swarm you if you look at one in the wrong way

The only Cartoon or game where hurting chickens doesn't cause the chickens to rise up in revolt is the Fable series. You have angered The Great Chicken Collective silly dragon and now you pay for it.

Get the flock outta there!

Weird...I'm suddenly have the urge to watch Monty Python and the Quest for the Holy Grail.

That reminds me of Oscar's Oasis, even giant lizards aren't safe from The Flock.

Hmmmmm? Must be the skunk cabbage ;)

@Shockwave: Damn, beat me to it.

@Drakeye: There's also Skyrim. The chickens won't rise up and revolt, but the guards might take issue.

@Spector: Not so weird. Actually, in Heretic 2, using a morph ovum (an egg grenade that turns the target into a chicken), there's a 1 in 1000 chance that you end up with the "Vicious Chicken of Bristol," which is a nine-foot monstrosity with about 10 times your hit points.

@Adam: Mega Ultra Chicken is no myth...but you need to sacrifice 4 monsters to summon him.

Squished Chicken: "My life flashed before my eyes!"

Other Chicken: "No, that was a dragon butt."

These Chickens must be imported from Hyrule.

Heh nobody here played Hunted: The Demon's Forge I see but mentioned it's sister Skyrim. If you choose the elf, Elara and at the beginning shoot two - three chickens it's not only an achievement to shoot 10 of them (with chapter text stating that seeing them running in circles is hilarious) but Cadoc will say to you: "Bored again, Elara?"

When the king bunny hits Silver's traps I wonder if he will trigger a domino effect as he gets blasted from one pit to the next and so forth until ending in the big one.

And they all gang up on the scared, careless dragon... like cluckwork! ...I’ll show myself out.

Hump the dragon has learn that Chickens are Just reskined raptiers and when they see blood they go insane and try to kill the bleeding thing no matter what it is, Dog, cats, horses , Elephants, you, or baby dragons..They are totally insane and fearless at that point. Fact!!