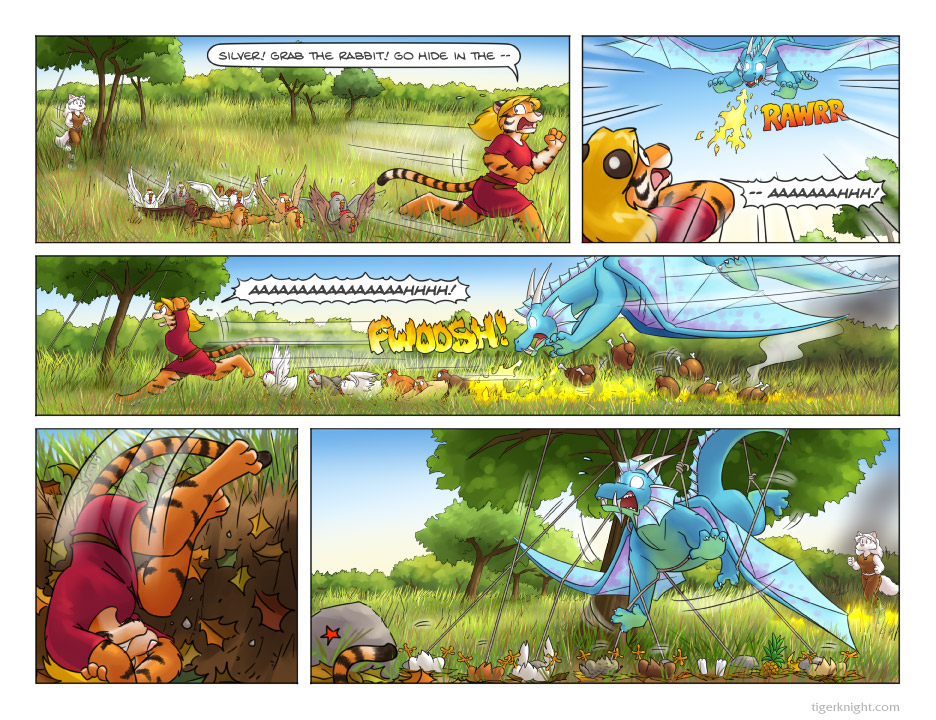 Silver's trap works! It caught pretty much... everything! \o/ Did anyone here order roast chicken? 🍗

The chickens' luck is turned upside-down and the dragon looks like Silver's puppet!

Well no chewing on Tor tonight plenty of roast chicken to go around.

So, now they have two dragons. At least they can ride in style. No manure carts for them.

Tor and Silver may finally get a decent meal!

Here's hoping the draggy can become friends with Tor and Silver over a shared love of those instantly-prepared chickens!

Mmmmm, chicken :-) And what, no explosion?

No chickens were harmed in the making of this comic, except for the ones you can see right there on the page.

@Soriac: Be patient, lol give them time; we both know those two will pull off a explosion..sooner later.

Oh, thats how KFC(tm) prepares the food! But who in his right mind would plant chicken to harvest more end of the season? By the way, dragons are able to burn the ropes.

@soriac, well there is a pineapple in one of the traps...

That moment you realize "oh hey, im a dragon! I can just turn those pests into BBQ!"

@E. Mousie that reminds me of Ivanova in Babylon 5.

"No boom?" "No boom today. Boom tomorrow. There's always a boom tomorrow." "..." "What? Someone's gotta have some damn perspective around here. Boom, sooner or later... BOOM!"

Well the pit did manage to catch a tiger. Maybe along with the chicken they can also try Dragon Cuisine.

Years ago there was a TV show called "Dragnet". I guess this is the sequel, "Dragon net". And oh, don't you love the sweet perfume of burning feathers ?

When camping outside, always have your dragon torch with you. I mean, what are the chances to stumble over some chickens?

Dragon: "No! Spider-man was here!"

I think more about Spider-Silver ^_^"

Those insta-roast chickens remind me of the game "Chicken Invaders". Anyone here played it? Good silly fun :) BAKAWWW!!

@Panther: I think Spider-Vixen was later in the MCU, but that just means the dragon would expect her even less, enhancing the element of surprise.

With all the chickens, though, Captain Vale Valley would be promoted to Colonel as soon as he invents the classified recipe of eleven herbs and spices.

If this continues into 9 to 9, would we get Iron Wolf and Doctor Jan?

@ Panther Well these are BURP!... were already dragon roasted, so target of opportunity kind of thing.

I noticed what kind of trap caught Tor.

It's the bunny king size trap , normally ; or the dragon one , in this case . Or a burmese tiger trap , if you're in a tex Avery cartoon XD

Fortunately Not one of the explosive holes.

Here at Ye olden Jackal enterprises guild ye can getten some slighly burnt chicken legn and a slighly shaven rabbot meat and a wooden sword free with evernt payments.we accept dabbloons, tupince, coal, and golded coinage. At our Ye olden Golden Tavern & inn. Rooms just 9 payment method (above) for one night, come with free dirtyish water and lightning protection. Deluxe is only 15. Comes with free meal(might be veal) and w.&lig.pro. and extra straw padding (may or may not be real straw but just mud) no refunds except for bathrooms if clogged. Bathrooms just 2. NOW rat free as of last month.