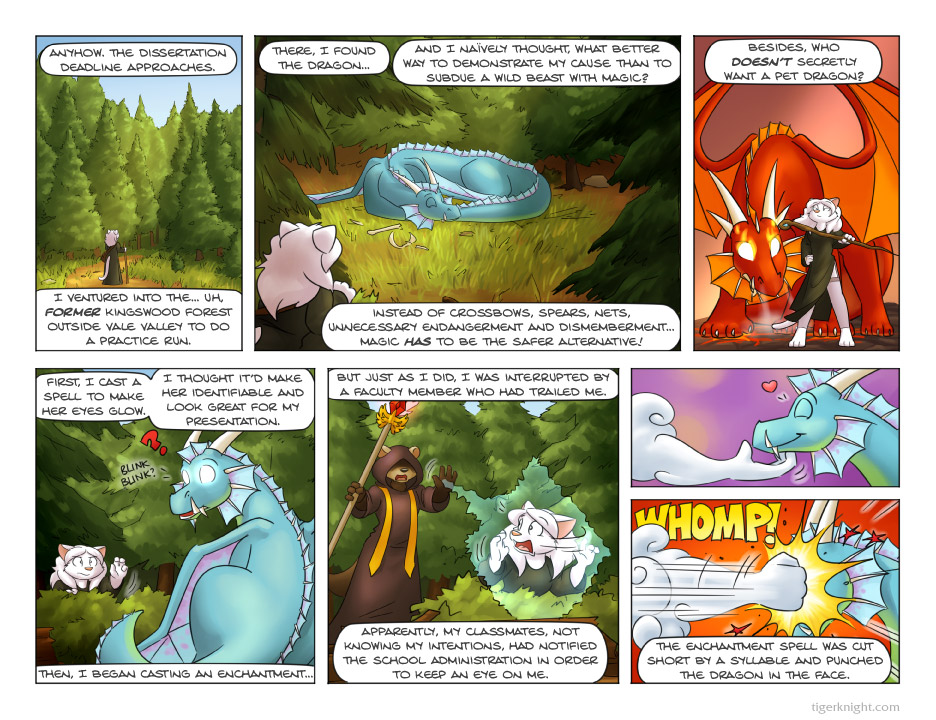 1
KIELA: Anyhow. The dissertation deadline approaches.
KIELA: I ventured into the... uh, *former* Kingswood Forest outside Vale Valley to do a practice run.

2
KIELA: There, I found the dragon...
KIELA: And I naïvely thought, what better way to demonstrate my cause than to subdue a wild beast with magic?
KIELA: Instead of crossbows, spears, nets, unnecessary endangerment and dismemberment... magic *has* to be the safer alternative!

4
KIELA: First, I cast a spell to make her eyes glow.
KIELA: I thought it'd make her identifiable and look great for my presentation.
KIELA: Then, I began casting an enchantment...

5
KIELA: But just as I did, I was interrupted by a faculty member who had trailed me.
KIELA: Apparently, my classmates, not knowing my intentions, had notified the school administration in order to keep an eyo on me.

7
KIELA: The enchantment spell was cut short by a syllable and punched the dragon in the face.

I see ze classic situation : whatever Kiela haz been interrupted by a stupid admin (not waiting to see what she plans) , she'll be ze guilty wiz no chance to explain . Even betting it's a paralyzing spell on her and ze faculty member be ze one "statuing" mama dragon

Did the faculty member know that would happen?

Kiela should cast that version of the spell on the faculty member AND the interfering students who dobbed her in.

Gotta make sure you get out the entire incantation correctly. Just ask Ash Williams.

Despite how this could've been easily avoided, I honestly can't blame the school staff and students for wanting to know what Kiela's up to. I mean, if I didn't know what someone was doing, doing nothing would be the last thing on my mind. For her classmates, isn't that basic decency? For the school admin, isn't that their job? I'm sure they meant well by trying to look out for her, and Kiela already straight up confessed to making a bad decision. And I'm sure the whole 'lack of communication' also rules out willful sabotage from the mix.

@Panther: My guess is that the spell is a 'silence' spell. A 'paralyze' spell would render her unable to move and thus unable to turn her head.

Being clouded by someone else leads to being stomped upon ^^.

Ouch. Wanna bet this stupid admin causing the dragon to rampage is also going to be why magic in public gets outlawed? Poor dragon.

And her dissertation, co-authored by Harold Ramis...

"It would have worked if you hadn't stopped me."

The administration sound a lot like my third grade teacher.

Roll for luck with allure.....yep, thats a 1 instead of gently taming the beat, you accidentally punch it in its face.

Dragonz are oftens sentient beings... and should not be mades ze pet of (unless zhey ‘wants’ to be yours pet). O_o

Alsos... zhey often likes to be petted (patted, huggied, etc.)... but you should asks nicelys first.

Ying-Bill frozen in a block of ice eeeee...

Seemz zat Ying-Bill haz mizunderstood my wordz : i've said Kiela deserved to get a pet , and not she deserved to be petted ^_^"

I second Dazrand's suggestion! Make the 3rd panel a poster!

gives a "gratin dauphinois" wiz clams to Bill , to calm him

What about ice-blue eyes ? Or water-blue ones ?

Has Dawns been in ze peyote agains? nom nom

"- Have you eaten some strange mushrooms in ze woodz ?"

I've noticed something in ze comic , and so a possibility to blackmail Jan (^_^") . But i wait ze next strip (or ze two next ones) to be sure about it