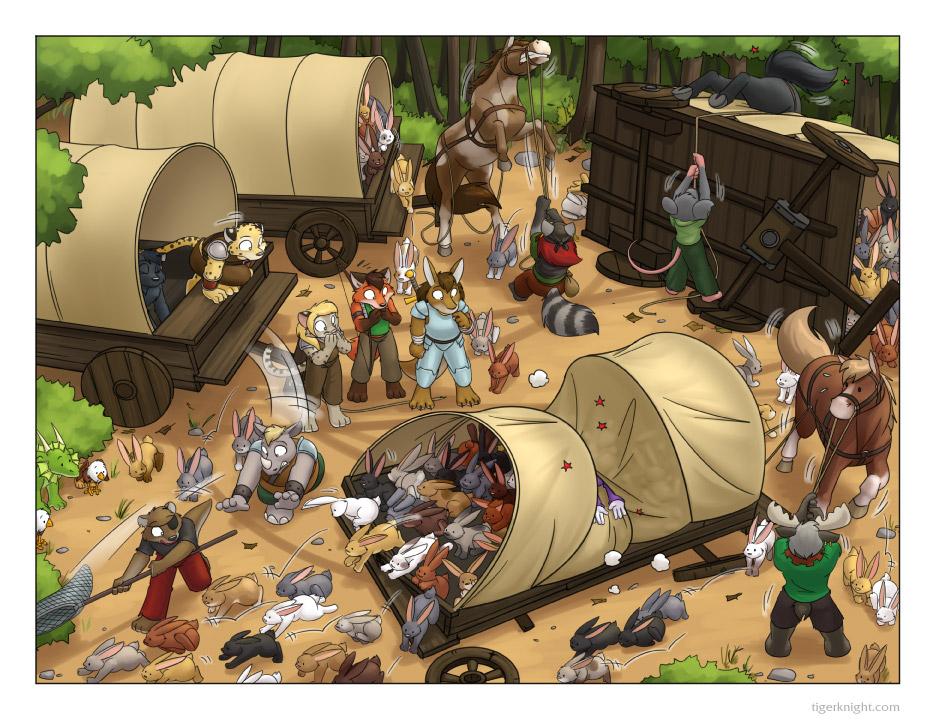 Kiela sticks the landing... sort of? She might have squished some buns. But that's okay, we know buns are mostly cotton fluffs anyway :B

0.o Well this explains the buns at the end of the last page~

Kiela survived! Though now knocked out.

That guy with the eyepatch certainly has his work cut out for him!

Well, now they just have to find in that tsunami of bunnies the one with chicken legs and a gold crown belt.

Poor Kiela... not only she's knocked out cold, but is back to the mercenary group who wanted her arrested for witchcraft.. now they will be even more convinced she's a witch, after she literally fell out of the blue sky...

Thats gonna leave a mark. No matter how soft that landing was, if you had enough velocity to cause wooden wheels to go crunch, that same impact is still going through the body as well. o.O

At least help is right there?

That must have hurt

Dear Tor and Silver, what happens if There was a animated movie or tv show of swords and sausages and which actors and actresses be perfect to play the characters?

The next round between Silvers weirdos and Cless' compadres!

....aaand Kiela lands the first hit smack-dab in the middle of Cless' trek !! A hare-brained move from the witchy sorceress that brings the bunnies out into the light and the clessy compadres stumbling over each other! Will there be rabbid retaliation or had Silver planned this feigned attack??

I love all the rabbits running away at the bottom. Got a laugh.

Well it wasn’t the hay cart... but close enough.

I must say that I did not see "Conestoga Wagon Full of Fluffy Bunnies" on the Random Airdrop Salvation Table.

I'd hate to be the Guard taking notes for this crash... Especially with the one horse hanging over the side of the overturned wagon.

Somehow... Herding bunnies/rabbits is going to be like trying to herd cats, methinks. XD

I like non-anthropomorphic bunnies. They are cute, cuddly and taste good. I don't eat anyone who can have an existential crisis about it. That would be cannibalism. I'm also fighting the "Bunny, pounce and eat." instinct.

Unfair! Wagon full of bunnies was not on MY bingo card.

What'll really be fun is when the dragon comes back to collect Kiela. That should provide some, 'excitement'. And cover for escaping bunnies and others.

The horse on the wagon's side is from a wagon on the left which tried and fail to jump over that tipped over cart. Bapple's there so Kiela should be safe. Now that Gryphon's have something to chase Mom's going to show up. The large Dragon spotted the bunny with the Crown and is chasing him toward the kingdom. Will the Barbarians also add to the confusion. The armies may be converging on this spot as well.

My guess is That Tor will land face first into the rear of the horse that tripped over the wagon.

Doesn't quite matter if that tarp support was made of wood or iron (the two most common materials), that landing still had to hurt. She's going to need bandages, minimum.

And to think they only put two buns in there at the start!

I'm surprised to see a wagon completely fall apart (mainly loosing it's wheels & such) from Kiela falling like that. But then again. She probably did fall from a pretty high height.

Does this remind anyone else of that one Hogan's Heroes episode where they make a plane fall apart mid flight?

No comments about it since ze time : i bet nobody haz noticed ze bunny "shadows" near Kiela XD

@Sam Workbench Hogan's Heroes? Was that the one where Hogan was blackmailed to go to London with Klink and ‘steal’ a P-51 to bring back to the Germans... only for the plane to develop ‘mechanical difficulties’ causing them to have to bail out? Oh and something about the plane just so happening to have a captured Messerschmitt engine rather than P-51 engine (or something to that effect... it’s been a good 40+ years since I’ve last seen those episodes o_O).

Dawn the DrMooID: Moo mooo, mooo! (Translation: I know nothing, nothing!) };p

Why do I have a feeling by the end of this mess, sure, Tor and Silver miss out on the lucrative reward but somehow end up with noble titles?

@ Random Guy The pirate might be directing the bunny escape plan.