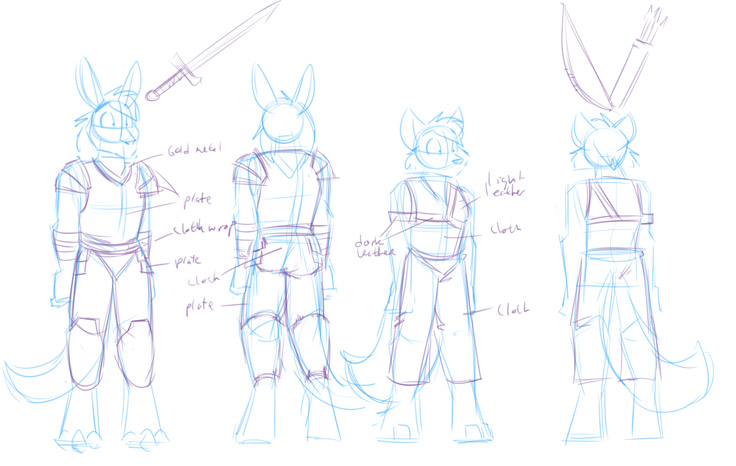 An idea came up on Discord chat today about asking the readers to name the fox and the roo from the adventuring group in Swords and Sausages. I have never given them names; they're simply referred to as "Fox" and "Roo" in my scripts. So yeah, I'm up for giving these two proper names. I'd like them to have reasonable names that feel right and fit both their personalities and the S&S world. Just first names will do ^^

Here are some quick character sheet specs to help ideas along:

Let's see what you all can come up with :3 You may submit as many names as you want; again I'm looking for fit and feel. Feel free to explain your thoughts behind your suggestions.

How about Tucker, or Tuck for short for the Fox, and Logan for the Roo?

I'm inclined to go with 'Ross' for the fox, but given his bow skills, 'Honeybee' might be a good nickname, both for the beeswax he'd use on his bowstring, and... well, arrows do more than give a good sting and all.

As for the roo, I'm thinking something like Justin. As in 'Justice'. With him driven by principles as he is, I can see him being stalwart about doing things in the name of those principles... even if it might not be ethically palatable, though it would be the moral thing, in his mind.

ROO: Sebastian is slightly regal and charismatic. A noble sort.

Terrance (Terry) is not bad for the roo

Billy was the first name I came up with for the fox, so how about William

For the longbowfox Matthew or Grey or clint. For the swordsroo... Moo? the first thing that popped into my mind was he was raised by barbarians and became lawful good as a "rebellious phase" which ended up sticking rather well...

And if anyone can figure out why I picked those names, then I'll give you a brava. Yes, there is a reason.

Rupert (or 'Roo' under sufferance) for the Kangaroo. Figured he hated being called 'Roo' when young; chose to 'turn the other cheek' and lead by example, rather than pound offenders (ie. became 'Lawful good'). It is also why he became an adventurer and decided to travel. Particulaly hates 'Hey Roo!'....

Todde (call me 'Tod') for the Fox. A good solid, dependable name with a hint of mischievousness and cunning.(Todd or Todde is Old English for fox and is still used to indicate a 'dog fox' rather than vixen.)

Rav for the fox. If you put two dots over the "a" is how you spell fox in Swedish. Marlu for the Roo. That's the Aboriginal work for Kangaroo.

Roo: There is a site from Mom Junction called 151 Australian Baby Names With Meanings. It lists names for Australian boys and/or girls, and gives the meanings for their names. Two examples, Aari = Mountain of strength, Danian = Famous warrior. You may want to check out the site yourself, and maybe see a name you think fits for the Roo. I just put the name of the site, that can be found in a link on google, but not the link itself, as I know that could be suspicious, as I cannot vet the link myself if it has anything harmful, or not on it.

For the Roo: Wally For the fox: Cody

I think you can guess where those names are from, though Cody isn't a fox. :=3

Anything but Skippy, please!

Roo: Vincent van der Waalys (a roo from Netherlands? Why not? ;-)

The fox should be named Fletch The roo should be Falchion

Fox: Ruddock or Rudy for short

Reed. John Reed was the Lone Ranger. And, Britt Reed was the Green Hornet. (Britt was the grandson of John's slain brother.)

Another thought Fox: Robin (I think you can guess where this is from. :=3 ) Roo: Mick - Mick was the "real" name of Crocodile Dundee, IIRC.

"Those kinds of comments are out of Bounds."

Fox: Larry {I have a cat IRL that you pretty much just summed up his character in your description. Is there, supports other cats in snax hunting, runs when name is mentioned}

Roo: Randal. Is fairly unique, holds up fairly well, can hold a bit of higher value, yet isn't over the top.

Roo - Darren More of a presence, like daring, but not too on the nose. Humble enough.

Fox: Rafe His grandmother, a proud descendant of Vikings who settled in the area, would have spelled it Raef, if she could spell at all. It derives from the Old Norse word for Fox via Old Danish.

He's lawful good because he's basically a rebel. Grandma told just few too many tales of the depredations of her (and his) ancestors with just a little bit too much bloodthirsty relish while he was growing up.

Also from Wikipedia: Rafe is a given name for a male used in many countries across the world. If the name is English, Scandinavian or German it is of Old Norse origin (meaning "counsel of the wolf" or "wise wolf"), derived from the Old Norse Raðulfr (rað "counsel" + ulfr "wolf") through Old English Rædwulf.

I think this fits.

Conneger for the Too and Crime (don't call him Red) for the Fox.