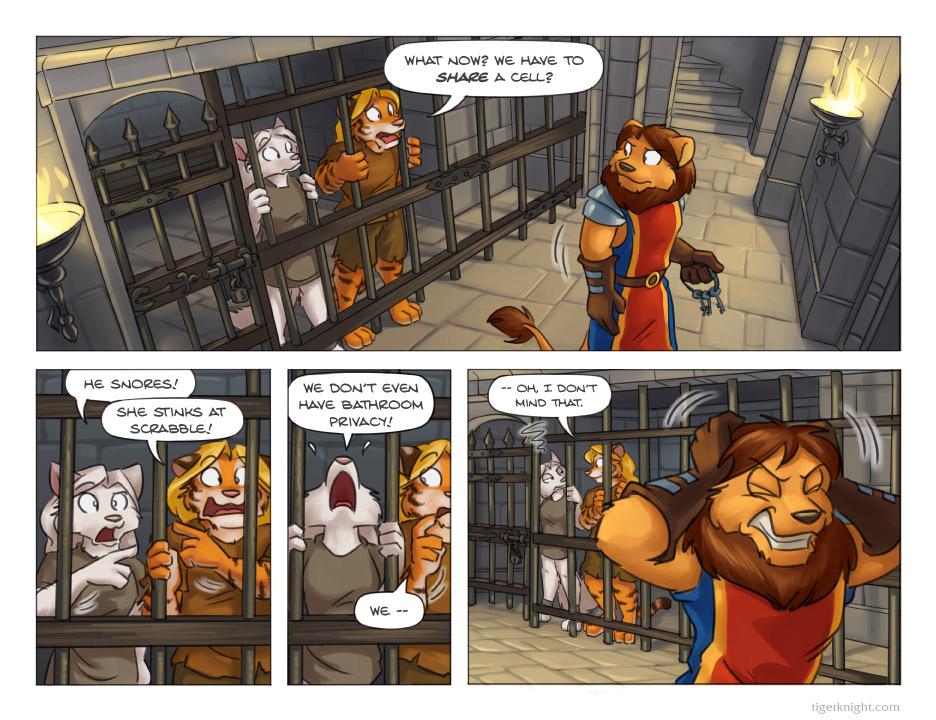 2
SILVER: He snores!
TOR: She stinks at Scrabble!

3
SILVER: We don't even have bathroom privacy!
TOR: We --

Is she not wearing any pants?

It doesn't look like she's wearing any pants. The city dungeon appears to have limited resources when it comes to re-clothing inmates... ;)

They do, however, seem to have a good cleaning budget. This dungeon appears to be absolutely spotless!

She will be even more scrued if she turns back and see only 1 pritch :)- Who will be sleeping on the ground .. cold cold ground shiver ^^

I like the comic very much,especialy the back ground comedy. It reminds me of old Harvy Kurtzman and Wally Wood classics.I look forward to reading more!

While there is an obvious and highly reasonable solution to who sleeps on the floor [reasonable if you are male anyway], the rules are that if he wins the fight for the bed, he loses. He should grandly offer her the bed and make it clear he will be staying on that cold floor. He of course will make the sacrifice for her sake. He might want to empathize just how cold and hard normally, but the lady here will be well aware of that and all too likely to suspect he intends to be very well paid for his sacrifice.

Meh. The Shining Knight Sacrifice Technique - while once a popular Good Guy move - has been effectively neutered by the Entitled Feminist groups, who consider such personal comfort concessions to simply be among their natural rights. The better technique for this modern age of equality is to simply take the bed without comment or eye contact, carefully make room for you both, then raise the blanket - and your eyebrow - and say "Well? . . . ." and let the silence stretch. If in less than 20 seconds, she doesn't hop in (with or without a running commentary on your ancestry and grooming), a kindly-spoken "Your choice!" is all that need be said, as you wrap yourself in the blanket and turn away - your body language stating futility more clearly than any argument. If she does join you, then naturally limit yourself to a chaste cuddle as you fall asleep - your morning wood will be all the icebreaker you need to raise the stakes in a few hours, when you will hopefully both be more rested. : )

Have to ask, is Silver a white cat or a arctic fox? Looks more like a fox to me but i see many call her a cat.

Silver is an arctic fox. I need to improve my drawing and design sense... :P

I just discovered this comic and I just have to say I'm really disappointed... that it only updates semimonthly :(

That's one great comic you're making here :-) It may be too early to say it, but so far I really like the personality of your characters!

Keep up the great work!

do they have a bed?

Ouch, I was trying to decide if she was a white cat or a white wolf (I was leaning towards white cat after the 'Too High' comment last chapter) because she looks so much like the Akaelae's from The Cyantian Chronicles (cyantian.net) and now you've confirmed she's actually a white fox. I just feel bad that I was so severely off base with her.

Nah, don't feel bad. My character designs all sort of look the same anyway ;) If she were a cat, I'd draw her with a shorter muzzle.

They're forgetting: it's a dungeon not a five star resort.

And finally, we have a concrete confimation on the tiger-confusion in the earlier comic's comments.

Ok, so who was supposed to remember the last-ditch lockpick?

"She stinks at Scrabble" made me laugh so long. Need to catch back my breath.

@Dragon Knight: They rate dungeons with torches, not stars. You can walk out of a one-torch dungeon. A dungeon that could contain a skilled rogue would be three to four torches, five torches would be super-max...not even a master mage could break out without help.

Torture chambers have separate ratings in skulls, and are based on the de Sade index.

Dragon hoards are no longer rated after a class action suit by the Dracos Republic and investigations by the SEC into alleged commodities market manipulations.

@Val Don't forget; she was nekkid when they cotched her. She's a lot more clothed now than she was in the last page. I'm sure that Tor's complaining vociferously, though.