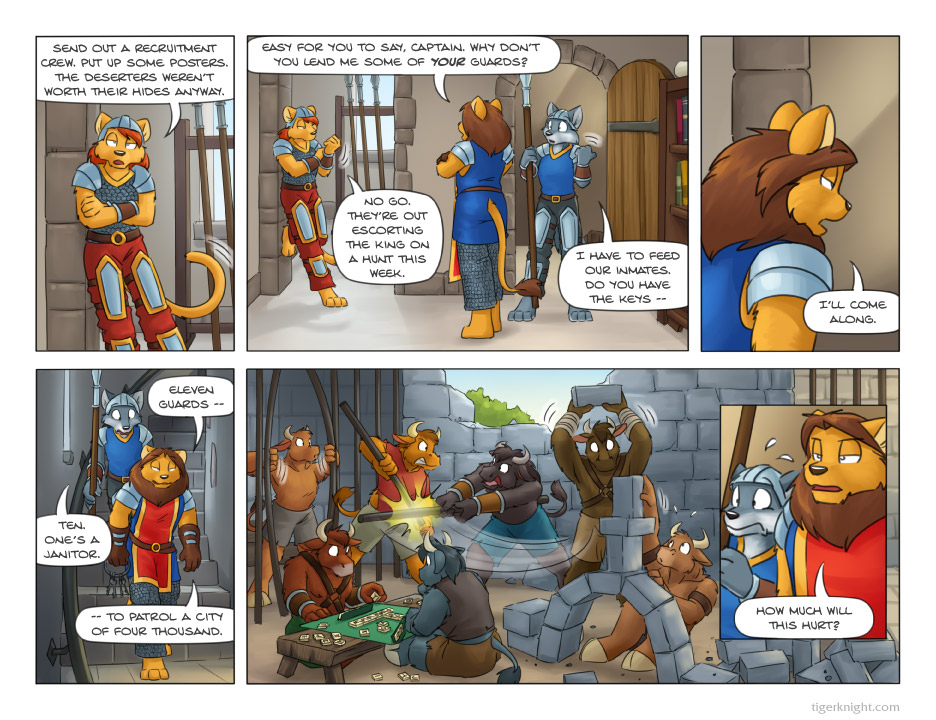 1
CAPTAIN: Send out a recruitment crew. Put up some posters. The deserters weren’t worth their hides anyway.

2
SHERIFF: Easy for you to say, Captain. Why don’t you lend me some of *your* guards?
CAPTAIN: No go. They’re out escorting the king on a hunt this week.
GUARD: I have to feed our inmates. Do you have the keys --

6
SHERIFF: How much will this hurt?

Great, now they need to pay for a new jail...

That depends, Sheriff. How bent are you on stopping them? They aren't going anywhere, and are just entertaining themselves with a rousing gaem of building blocks and Scrabble.

It would appear he is going to hire the barbarians, and is already sure that will not work out well. He may well be right. But what else? he needs guards, and anything he gets will have to deal with the barbarians anyway. He doesn't have much choice. Of course, taking a distant and long vacation probably sounds better, but...

How do they keep them in?

Bars don't mean much to them as well as playing with bricks from the walls...

But some are already training.

@Tigermark that is not Scrabble it is a game called Mahjong. It is quite popular in Asia and Jan had drawn the correct way to play it. (The "wrong" way to play it is demonstrated by Microsoft Mahjong)

By the way, I think it requires four cows to play it. And how did they manage to smuggle a set into a prison? GGWP the guards who took them in...

Tor and Silver were right: it's really fun to dismantle a dungeon :-)

@Sonic Wolfe Nah, it actually is Scrabble :D Although with the way the image is resized, it does look like Mahjong.

"How much will this hurt?"

Oohhh... about this much MOOOO-oore.

Huh. For some reason, I can't stop wondering why the Captain of Royal Guard - who, I assume, should be at about the same level as the Sheriff on the organization chart - is wearing armor in the same style as the street guards instead of something fancier.

Barbarians seem to be quite literal, but obedient. They were told to stay in jail, so they do. They were NOT forbidden from making toys from what's available, so they did. :)

Well....he could always hire the Barbarians to fill in for the deserters. Then Hire some more from the city populace.

Wow...in this prison, there sure is a load of bull.

The question is: how do these bull-ies feel about a certain fox and tiger?

So does everyone put in that jail dismantle it but not attempt to escape?

Nice to see that the barbarians are literate enough to enjoy scabble. It implies good things about the education available in their society. Unfortunately, why do I suspect that there are only "M" and "O" on the tiles?

It looks to me that the captain is giving a "bras d'honneur" to the sheriff...I know this gesture doesn't mean anything in the anglo-saxon world, but let's just say that in Europe and in the Mediterranean world it is rather the same than a middle finger, possibly worse (depending where you are from) : was it intentional? Also : I would hire these guys right away, instead of taking back on board the whimpy so-called guards...

Novalpha: fairly sure the Captain is simply 'polishing his nails', you know when you are pretending disinterest in what the other person is saying, and you blow on your nails then 'polish' them on your clothes then check them for cleanness?

The first step to hiring a new crew of bull-ie boys is to get Silver to give them a moo-tivational speech. If she does it in rhyme, they'll be cowed into obediance. . And while we're at it, hire ol' spottycat with his musical axe so the enemy can die laughing. (Well, ya know, there are worse ways to go.)

Congratulations with 100-th page of "Swords and Sausages"!

Wow, that completely blew over my head. I'll have draw something special to go along with the next update!

Are those two in the lower left hand corner playing Mah Jongg? I might think Scrabble except that they aren't playing on a board.

Sheriff if you need a new jail you can have Wappito Jail and take it off our hands. It is sitting unused. They even refused to use it as a homeless shelter. It costs the county too much to keep it running with out prisioners.

@drivernjax it's dominoes or scrabble

@Matt Well, I wasn't sure. I thought Jan might be adding a wee bit of Chinese culture to medieval Europe. LOL.