Just when the kingdom falls into disarray...

Swords and Sausages follows the daily lives of two bumbling rogues, Tor and Silver, as they make their way through a world where things aren't quite right.

Or, as others have described it:

“Tales from the days of old, if your days of old had less than competent tiger rogues, cow barbarians, and other silly things.” — Mark Stanley, Freefall

“A bounteous romp of a comic, about two charmingly bumbling rogues. Guaranteed to make milk come out your nose. Even if you weren't drinking any. You should probably get that looked at.” — The Nai, Ark World Galleon 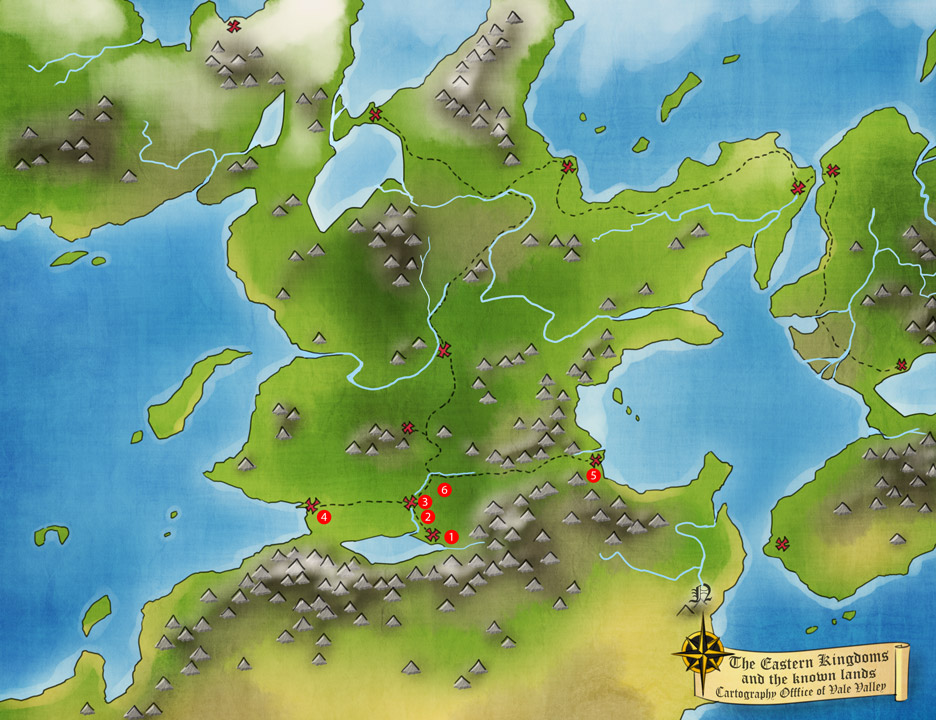 ① Vale Valley
Chapters 1-5 & 9. Vale Valley is wedged in the middle of the Eastern Kingdoms.  Situated in geographically unstable terrain, it rains on Sundays, and river runoffs bring finger-gnawing carp into the castle-town's well waters. The King is said to be an avid fisherman, but despite having successfully caught wave after wave of bad luck, he has yet to be seen fishing on Sundays.

② The North Highway
Chapters 6-7. The only artery linking Vale Valley to the rest of the continent. Toll-free, and therefore poorly maintained.

③ A Hamlet
Chapters 8 & 10. At the crossroads between Vale Valley, Sevenshore Brynn, and Redstone Keep, they pledge alligence to no one and have a very successful tomato harvest.

④ Sevenshore Brynn
Chapter 8. At the western shore of the Eastern Kingdoms, Sevenshore's populace are primarily seafarers. However, a recent breakdown of trade agreements have led them to expand their influence inland. Their military are called Bluecloaks. They think the Redstone folks walk funny.

⑤ Redstone Keep
Chapter 8. On the eastern shore of the Eastern Kingdoms, the inhabitants of Redstone Keep are mechanically-inclined engineers and intellectuals. They think the Sevenshoreans smell weird.

⑥ The Ancient Battleground
Chapter 10. A great battle took place on this ill-fated patch of land north of Vale Valley, which ended in a giant explosion when a magic spell went awry. 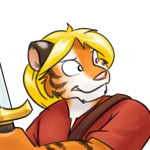 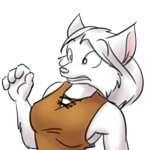 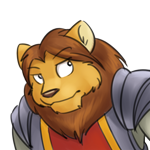 The Sheriff
Panthera leo. Sheriff of the Vale Valley city guards. At odds with Tor and Silver.

More Characters (In order of appearance) 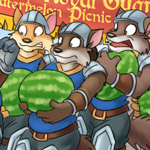 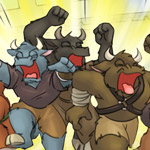 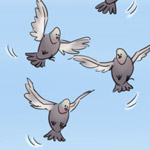 Pigeons
Columba livia. They seem to have an agenda. 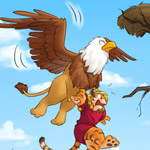 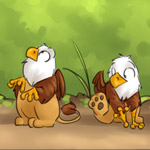 Hunt and Peck
Panthera haliaeetus. The younglings Mrs. Gryphon apparently has a problem keeping an eye on. (Hunt is the girl, Peck is the boy.) 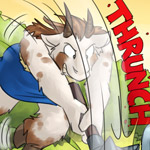 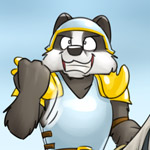 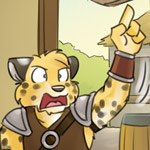 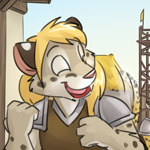 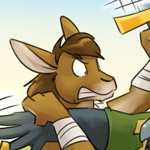 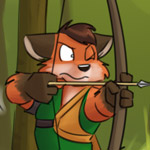 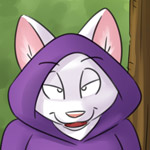 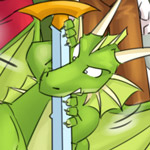 ?????
Varanus fantasia. The young guardian of an important sword.

Even More Characters (Than you can shake a trout at) 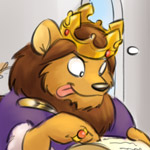 The King
Panthera leo. He controls the horizontal and the vertical. 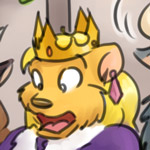 The Queen
Panthera leo. She controls the kingdom. 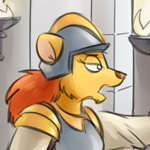 Captain of the Guard
Panthera leo. She's in charge of the Vale Valley royal guards. 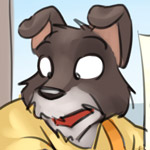 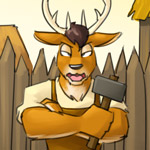 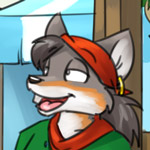 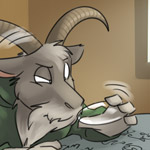 Swords! Sausages! And other 'S' words! (The story behind the comic...)

I've always had a desire to create a fantasy comic book or novella, ever since picking up David Eddings' Belgariad series when I was 14 (that's 15 years ago, as of this writing [2011]). I toyed around with various scripts through high school but forgot about it after going to college. Then, World of Warcraft came along in 2004 and I was bit hard by the fantasy fiction bug. I decided to write new scripts and develop several new characters: I yanked Tor out from College Catastrophe (since he was introduced very late and didn't fit in with the rest of the cast) and found him a companion, Silver, who resided in my sketchbook but never made the step out. The Sheriff is the upstanding, straight lion who gets caught in Tor's and Silver's antics.

So why did the development take so long? As it turned out, I was trying my hand at traditional high fantasy, which was stupidly complex and I kept writing into corners. Plus, I was getting bored of the writing -- a bad sign. A breakthrough came when I needed to produce 5 'semester final' pieces for a technical illustration class in art school -- at the time, I was burned out and couldn't be bothered to research new material, so I pulled out Tor and Silver just for kicks. I drew them in various comedic situations, and then it clicked: I was way more adept at producing comedy stories than any other genre. So it's back to the drawing board (and word processor). The first episode was drafted in 2006, and I've re-embellished it several times since. Then I waited some more until my art style and process stabilized (including the transition of going digital). The comic finally made its online debut in June 2011.

Yup... all this just to bring some silly JPEGs to your screen :)