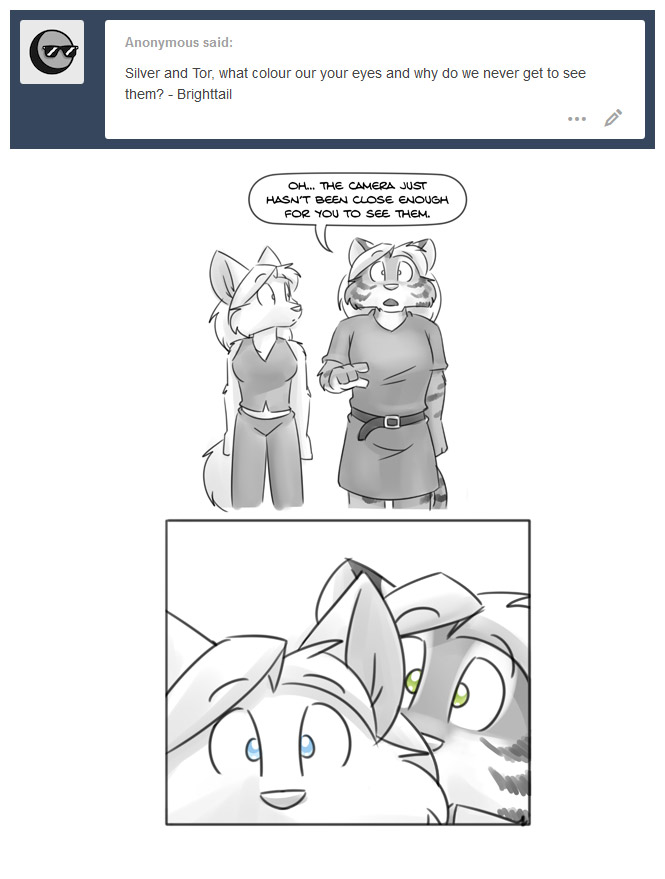 Have a question for the cast? Send them here!

I thought Silver's eyes might be blue, but I thought Tor's would be golden yellow (He is a tiger after all.). However, since Silver's a fox (in more ways than one. LOL.) they could have been amber brown.

@drivernjax: good old scale of anthropomorphism, this is always true in any furry comic to guess how much of their characters remain how much of their "real world" animal counterparts. When in doubt, especially in Jans comics, it always follow the rule of funny. :-)

That would have been the perfect opportunity to troll the anonymous asker by keeping the second panel all grayscale, just like every other AMA... :P

Thanks for the answer. Although I kinda found out the answer myself after asking. When Tor kissed Silver we saw her's were blue and when Tor was staggering through the skunk cabbage we saw his were green. Thank you tho!

I was going to say, "Ah ha, I guessed Silver's eye color right!" for my fan art http://www.furaffinity.net/view/19195591/..., but then I realized that you MUST have shown her eyes to be blue at some point previously..., and I did choose too dark a shade.

What happened to the vest? Did Tor get "excited" or did he put his tail between his legs?

Soriac, you are quite correct. You should see some of the characters I've created for a story I'm working on, especially the lovely lady that is my icon. (She and her personal history can be found on my FA and DA pages, if you're interested.) While I don't consider myself to be an anthro writer, I do like injecting one or two (or more) into a story. It helps to make it a bit more interesting.

BTW, Jan. I've been looking at the drawing at the top of this page for a long time and I just noticed something wrong with it. Silver isn't holding the bowstring properly. She's not holding the arrow between her fingers. Being a former archer, I know that you couldn't hit the side of a mile wide and tall barn like that.

@drivernjax (One former archer waves at another) Yes, I know it is wrong; I was just hoping no one would notice it's wrong. If I were to position her hand in the correct place (right beneath her chin), the fletching would cover her mouth and we won't see her smile. So I had to move her hand down. The problem with doing that is that the arrow will be at too steep an angle (pointing upwards), which makes it look odd. So I compensated by not having her pinch the arrow.

I'm about to retire this banner graphic anyway, once the new site goes online (The code is done! Now doing lots of testing...). It's a weird idea to begin with, and I think I have something better to replace it ;)