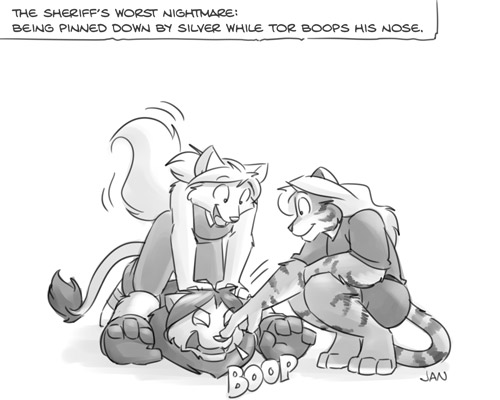 So I asked the readers, "What do you think is the Sheriff's worst nightmare?" and received a lot of fun responses, amongst them:

"Tor and Silver becoming king and queen" "Tor and Silver being his only two guards." "Being caught making tender love to Tor... Or was that just in the fanfics?..." "Having his mother visiting and embarassing him in front of Tor and Silver!" "Being replaced by a cow by order of the king and queen for some unforeseeable reason." "Tor and Silver becoming honest citizens and behave themselves. This is just unthinkable and the suspense would make him a nervous wreck. It has to be some kind of trap. It HAS to be..." "What the Sherriff fears most is not Tor and SIlver but the hair loss worrying about them will inevitably cause. Can you imagine anybody more depressed than a balding lion?"

But nothing tops the scale as much as the physicality of an inescapable nose boop from your worst nemeses...

Hmmm. I would have thought it being waking up in some sort of backwards nightmare reality where he is in jail and Tor and Silver are the sheriff and deputy. Of course, they would still be somewhat incompetent, but he would KNOW that if he escaped the King and Queen would just have him thrown back in again. Now THAT would just drive him insane.

I think it's the fact that SILVER is holding him down. (After all, she's a vixen, not even a lioness or tigress.)